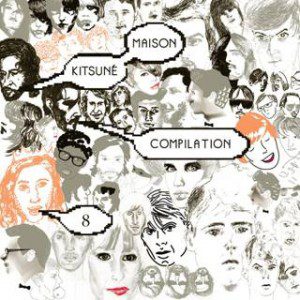 With the success of their last compilation “Kitsuné Maison 7,” the French techno label, Kitsuné, is gearing up to throw some more dope beats your way. Busting with life and creative ideas, the Kitsuné compound has been packed with friends: girls and boys, new and old, quiet girls, neurotic boys, ─ drenched with vivid personalities from all over the spectrum! Kitsuné mobilizes all that is most passionate and exciting to deliver you a sick-ass compilation. I loved their last one featuring remixes of Phoenix, Autokratz, and La Roux, and can’t wait to start my listening on this new one: “The Chic and Nice Issue.”

Stay tuned for a full album review, but in the meantime peep the track listing descriptions below and cop the album Nov. 30!

1. French Horn Rebellion – “Up All Night”
We recommend their four Euros D.I.Y. video for such a gigantic song.

3. Siriusmo – “High Together”
Sublime and simple. It would make a Cistercian monastery dance. The priests would be allowed to marry if they were listening to this in the Vatican.

5. Midnight Juggernauts – “This New Technology”
Panoramic and ambitious, by the most sought-after producers this month.

6. Heartsrevolution – “Dance Till Dawn” *
The Heartsrevolution couple is back. They’re nuts (we say ‘intense’ to remain polite). They shine of a thousand CRYSTALLIZED™ sparkles. A very 1989 piano for a track that’s already been aired on Gossip Girl for three full minutes.

7. Logo – “Junocide”
Proper aceeeed to incite you to drive faster. Also perfect for a row.

8. Two Door Cinema Club – “I Can Talk (Moulinex Remix)” *
Our favourite from Kitsuné Maison 7 is here again, no wonder the band has now signed to Kitsuné. Their album, to die for, will be out shortly. How will these very shy boys deal with the hordes of female fans that will soon land on their doorstep? A song about silence and the unexplainable.

10. Beni – Maximus “(Harvard Bass Remix)”*
Awesome track! Maximus, minimus, very Keith Haring. The video created so much on-line hysteria that we had to stop the comments.

12. Jolie Cherie – “Star”
For once that a band with a French name is actually French and not three Japanese girls with pink hair. This track is the kind of stuff cute Parisian girls who think Kate Moss and go to La Durée listen to.

13. Chew Lips – “Salt Air (Alex Kapranos Remix)” *
A song about America. They met in a restaurant and Alex Kapranos agreed to do a remix.

14. Delphic – “This Momentary” *
Believe the hype. Delphic are enormous. Well, they will be enormous. And will remain enormous. We should make a movie, just to place that track in.

15. Memory Tapes – “Bicycle”
Another Technicolor track that includes a choir and smells good homemade cooking. So Anglo-Saxon it hurts.

16. Parallels – “Find the Fire”
Kate Bush 2010. The song that the American director John Hughes would have used if he didn’t pass away this summer. Special mention to broken-hearted sixteen-year old girls.

17. Nottee – “Control”
A girl who’s looking for truth and wants to walk straight. So rare. Totally crazy. Another Kitsuné finding.

19. Crystal Fighters – “I Love London” *
A future Kitsuné release, for raving mad London queens. And for you too.

20. My Tiger My Timing – “I Am The Sound”
The band (some friends, a brother and sister) is already scouring the venues of Leeds, Bristol and Manchester. The song promises: I’m not trying to chat you up, it’s just we’re going in the same direction and I’m going home. Perfect.

* Single to be released on Kitsuné in the current year