Whoa! For a few seconds there I thought I was back in the 80’s playing some Space Invaders or Asteroids. With their intro track (AM), it’s clear that Neon Indian likes to play with the whole galactic beats. You’ll hear some spacey sound effects and cheesy rhythms through out the whole album. 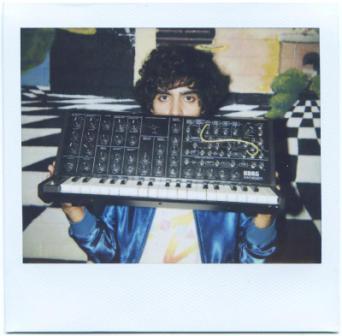 If you’re all about the dreamy vocals and bizarre synth sprinkled over a delicious poptart of sound, you’ll fall in lust with Neon Indian’s deubut LP, “Psychic Chasms.” It’s oozing with 80’s flair and surreal vocals. At times I found myself in a happy haze of euphoria while listening to the album 10 times over, either that or drifting back to a drug induced bubble of giggles and ecstasy. Stright up, “Psychic Chasms” is a happy album, you can’t help but smile as you listen to each track. Putting you in a dreamy state of lush listening, it’s the soundtrack for that half-asleep morning sex we all love to indulge in (sans the morning breath).

As the elusive new project from composer Alan Palomo, Neon Indian’s “Psychic Chasms” is a nostalgic medley of tunes resonating from the 80’s. Keep an eye out for Neon Indian, they’re a hot band on the rise.

“Deadbeat Summer”– Even before looking at the title of the track, I thought to myself, this song would make for a great summer anthem. With it’s upbeat playful persona, there’s nothing “deadbeat” about it. Through lazy vocals and groovy sounds that tend to over-power the lyricism, I really can’t make it out what’s being said in this song. But it doesn’t matter cause the beats are as sweet as sugar.

“Psychic Chasms” – This album title track is just full of 80’s love. From electrifying synths to filtered ambient vocals, you’ll think you’re on the set of the original “Revenge of the Nerds.”

“Ephemeral Artery” – You know how some dancers look mean when they dance? This song would be perfect for them. It has the sickest beats flowing with bombastic sound effects. Major lip puckering, head bobbing and attitude dancing here; fierce.

“Should I Have Taken Acid With You” – As if the title isn’t enough to get you turned on to this track. Bubbles, whirls and swirls, you’ll hear everything that isn’t normal in this tripped out lullaby.