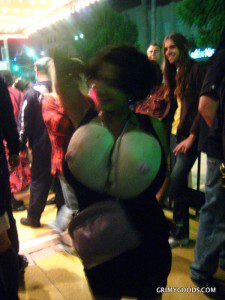 Halloween, every man’s favorite holiday – the sluts come out at night! This is the one day of the year any girl can dress as they please with out being judged. With that said, what’s going on for Halloween LA? Here’s a list of cool events worthy of hitting up this Halloween. Have fun boys and ghouls.

Halloween shows are always a fuckin blast. Last year we did the Roky Erickson Halloween at it was killer and one of the best suited for Halloween. This year you should do the Dirty Projectors! They’re certainly no Roky, but they sure are an awesome talented band.

Masquerade: A Halloween Costume Ball & Dance Party for KCRW with Little Dragon , Sea Wolf, Edward Sharpe and The Magnetic Zeros @ Park Plaza
This sounds like an absolutely awesome event. One, it’s for KCRW; two, they use the word “costume ball;” and three, the fuckin’ line-up rules!

The Rakes @ The Roxy
I like The Rakes, therefore you should go to this show, yo. British indie rock at its finest, go get down with it!  THEY SPLIT UP!

Down and Derby Roller Disco @ echoplex
Time for some skating, drinking and dancing! Live performance by Pink Dollas and shit load of disco tunes to be had!

Cemetery Screening: “Halloween” @ Hollywood Forever
This Halloween, head on over to the Hollywood Forever Cemetery for a special screening below (and above) the stars. Cinespia presents the original 1978 horror masterpiece as part of a special benefit for the debrah hill foundation.

LA Haunted Hayride
Back in the ’20s, insane asylum inmates escaped and killed reveling party guests at King Gillette Ranch. Relive the experience with a chilling hayride through these haunted woods.

Mangler’s Haunted Asylum
Think you can handle an abandoned, two-story asylum, with 25 rooms of evil madness? Prepare to get scared shitless! This place was the scene for gruesome murders spanning 20 years. Get ready for hostel-style torture chambers, zombie attacks, a “Hellavator,” and more!

Pasadena’s Old Town Haunt
Descend into the basement of the historical Union Savings Bank Building where mysterious occurences have taken place in the buildings’ deadly 107 year history. In fact, something lives down there in the dark….not some one, but some thing. The basement that was sealed shut for decades is being reopened for your investigation into the unknown.

(Listings from the The Rundown LA)

LACMA’s Annual Muse Costume Ball
Arty, eclectic costumes (including a competition), open bar, and both DJs and live music. Also, get a late-night viewing of Heroes and Villains: The Battle for Good in India’s Comics exhibition.

Kandy Halloween at the Playboy Mansion
Flo Rida and DJ Mister E perform, plus the possibility of a cameo by Hef in his Halloween-themed pajamas. Expect robotic monsters, a haunted house, and a forest packed with ghouls and Kandy Girls.

Official “Thriller” Halloween Party at Dakota Lounge
Channel your best MJ for dance-offs and costume contests. Get there early for $3 drink specials from 9-10p.

Cirque at The Kress
Four-floor Hollywood behemoth gets decked out for a macabre weekend of events. A Friday-night masquerade ball gives way to Saturday’s Cirque celebration. Open bar from 8-11p.

One thought on “What’s Going On For Halloween In LA? UPDATED!”