I’m spiraling on a sound-wave of musicianship with a harmonica on my way through a gliding rock tune called “Bobby’s Song.” This 10-minute musical track is broken down into various branches of stylistic blends from the 60s past with touches of modern wonder. By the 3rd minute it breaks down to a mystical flute/pipe tune like a little creature-podling jamming with The Aliens … Turn the page and this track keeps leading you to another sound factor and it keeps building and changing—a sound traveler I feel I am but as it ends its slowing down and detuning while I melt to liquid. Sir, I have my ticket punched out this concludes my trip on track-one. 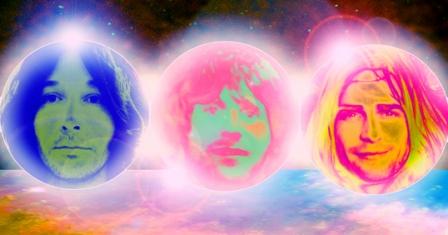 “Amen” is a mini dark spell that transitions to track-three, “Theremin,” containing various percussion trinkets, subtle keys and great live samples mixed with a distant piano and a roadster leaving the premise. The soft “Theremin” melody fades, but carries over into a straight soft attack mix into track-four, “Everyone.” “Everyone” has these awesome saloon style pianos and a wonderful guitar melody – nice touches of “Theremin” trinkets in the distant backgrounds.

Bring that beat back! Yeah, “Magic Man” is a straight four-to-four Aliens jam with a nice brass touch in the end. “Billy Jack” has these pieces tied together but going in then completely fading out to this psychedelic rock track but drops intermittently to subtlety then builds back to another Aliens musical spiral journey. “Luna” is instrumentation of drones, synth creatures, and waves that numb your senses (like smelling coffee for the next fragrance) and sets you up for this armchair Bowie-era rock track called “Dove Returning” with a lovely guitar.

“Sunlamp” has this nice rhythmic guitar in the background with other guitars entwining with each other like falling musical notes. “Smoggy Bog” short but with very familiar sound that I can’t put a finger on (an old 45 that was played to me long ago with little organ treats and short guitar waves).

“Daffodils” is a poised track that I cherish which floats and glides along a calm melody of ambience. “Boats” takes you back to a time where there was much clarity and endlessness.

These Scottish boyz know the intention of their sound and are creative with all of the treatments of their songs. Lastly, “Blue Mantle” closes the shade but still lingers through in such a peaceful way that permeates into ones inner self. It’s music like The Aliens which takes the blandness out of one’s listening palette.

2 thoughts on ““Luna” by The Aliens – Album Review”