When I was at the Download Festival ’06 in Donington England I could not understand the stupidity or lameness behind the locals throwing bottles of piss at the bands their supposedly a fan of. As bottles of piss were dripping over our heads and onto Guns n’ Roses taking the stage before us, Axl just about canceled the show if the shit didn’t stop.

Again I find myself dumbfounded by some of these idiots that continue to throw drinks and bottles to those performers that they love. It’s not a fuckin cool think to do you dumbass! 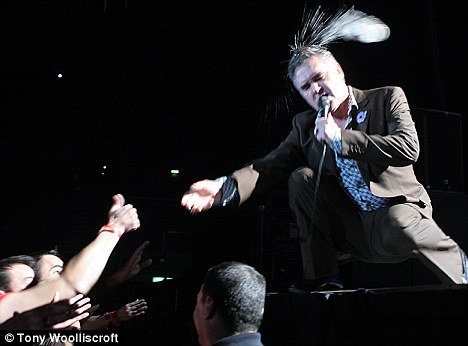 At Liverpool’s Echo Arena on Saturday, an audience member tossed a plastic cup at the legendary Morrissey. He was in the middle of “Black Cloud”, the second song of his set. And sure enough, after the drink was thrown, Morrissey stormed off-stage after saying, “Goodnight”.

Way to ruin a good show and insult the Moz! Fuckin’ piss ant.