Awe man, this is so sad to hear coming from a performer that puts his absolute all into his live act. I swear, watching Dan Deacon live is such a warm and fun, yet tripped out feeling. With all the energry, movement, and interaction he puts into a show, it’s no surprise the man now has some crazy back problems. Show after show, that shit’s gotta take its toll. 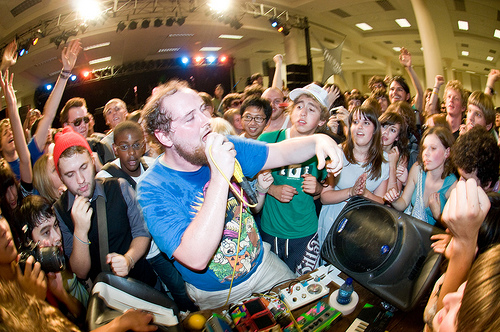 In order to avoid even bigger problems, Deacon has been hospitalized and thus cancels tour due to acute sciatica. Ouch!

The Carpark Records Twitter writes, “dan deacon is having some serious health issues with his back and has to cancel the remaining dates of his North American tour.”

According to a post on the Facebook page for Deacon’s show at Clark University tomorrow night says, “DAN DEACON HAS POSTPONED THIS SHOW on 11/14/2009 DUE TO HOSPITALIZATION WITH ACUTE SCIATICA. THE SHOW WILL BE RESCHEDULED TO JANUARY.”

Get well soon Dan! Everyone lubs you lots!