Watching a live Black Hollies show and listening to them on audio are two completely different things. On my many trips to San Francisco, I was stoked to catch them play a rockin’ show this past Saturday, Dec. 5 at Bottom of the Hill (I really like this lil bar/venue).

While listening to these New Jersey natives’ new album “Softly Towards The Light,” you may feel as though you were listening to some old vinyl form your parents collection. With melodies and vocals full of psychedelic-pop infused with familiar sounds from The Beatles, The Seeds, The Sonics and many other greats, I can honestly say I was a bit addicted to this groovy display of music. However, much of the songs on “Softly Towards The Light” meshed together into one big blob of sound. It’s hard to differentiate one song from another with such vocal and instrumental similarities. 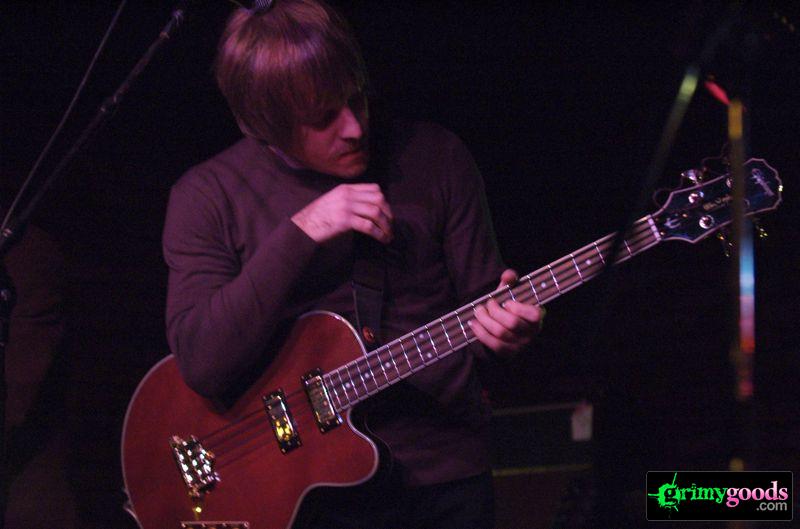 The Black Hollies were loud as fuck at their Bottom of the Hill Show! With regards to their audio tunes, I had no idea how fuzz-rocked my ears would become at their live show. Drummer, Nick Ferrante rules his drum throne like a true pro. That guy is the solid back-bone to the band and knows how to lead and throw it down. As for lead guitarist, Herbert Wiley, his guitaring put an immense smile across my face for their entire show. His fuzzy guitar heroics are full of wailing psychedelia that made his intense guitar solos all the more enjoyable. You don’t realize the power behind their instruments for both Ferrante and Wiley until you catch them live. “Softly Towards The Light” does not do them justice.

With a lead singer that looks like a youthful version of the late-great, Sky Saxon, front-man, Justin Angelo has a seductive set of soulful dream-like vocals. Although they’re crisp and clear on their album, Angelo’s vocals got blasted out during The Black Hollies’ live set. I could barely hear the melody or understand the lyrics between the thrashing of the guitar and drums.

While juggling both guitar and electric organ, Jon Gonnelli was a joy to watch on stage. He’s very into his music and has some crazy moves to front. While dazzling us on the organ, Gonnelli kept kicking his left leg out far behind him as he engaged in some funky moves. It made me giggle.