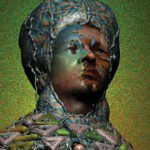 For the most part, they make you wanna dance, bust out your Casio, pull on your American Apparel leggings and rock like it’s 1987… or Silverlake this Saturday night. Yeasayer amps up the pop factor and 80s influence of their latest album, “Odd Blood.” The band gets a little hipster friendly by combining synth pop with cheery-dance-worthy rhythms to join the rest of the genre mashers such as Animal Collective and MGMT. However, that’s not a bad thing.

The 80s influence is mixed with a heavy hand alongside the falsetto vocals and electronic zips, whips and twirls. All the sounds collide in some hazy, funky, trippy danceable ditties. “Ambling Amp” is the first single and is the prime example of the sound of the album as a whole with its’ bouncing, reggae-inspired chorus and static, fuzzy electro flare.

The debate could be struck that while the band is taking a new approach that they are falling into class that is quickly becoming common, a little cliché and over-saturated. That’s not to say they aren’t doing it well. If they are in the class, they are in honors society. “Love Me Girl” is a slow-jam sped up with tense, quick piano keys and funked-up with electronic pulses. Somehow, it reminds me of Flight of the Conchords, but you know, for real.

Whether it was intentional or happy accident, Yeasayer made an album that is certainly now. It’s a genre-bender, game-changer referencing the past, but slapping it silly with some present. While there are faults, and definitely some missing elements, at the end of the day, Yeasayer makes you wanna party, and there ain’t nothing odd about that.

One thought on ““Odd Blood” by Yeasayer – Album Review”