LA’s shitkickers, the Franks have been playing lots of shows lately and most recently toured with the Shout Out Louds. After playing a showcase we put on at Spaceland a couple weeks ago, we caught up with Colin (Jean Don’t) for a brief Q&A.

And be sure to check out our photos below from the Franks at the El Rey Theatre on May 20, 2010!

So why the name the Franks?

It’s a long explanation that I usually don’t give but it’s third degree irony where it’s both in earnest and jest. A lot like the band. I wanted a name in the tradition of good and decent, raucous rock bands. Ever since Y2K it seems like people hate on “The” bands but it’s tradition. Who are we? We’re the Franks, obviously. And frankly we’re one of the best young bands around.

How long you guys been together?

How did you get hooked up to open for the Shout Out Louds?

We’ve been friends with them for a while so they were willing to let us tag along for their West Coast dates. Think they were happy they did.

Three words to describe your music?

Who are some of your favorite bands?

The Nips, Modern Lovers, Velvet Underground, the Ramones, the Clash, the Pixies, the Sonics, the Everly Brothers, Johnny Cash, Buddy Holly, the Beatles, the Beach Boys, the Hives, the Strokes, the Libertines, Joy Division, the Pogues, the Cramps, Elvis Costello, the Violent Femmes, Frank Sinatra.

We played this spot in Glendale that I don’t think is around anymore called The Scene. Honestly, the show was probably doomed pretty early on—around the time I spilled a bag of beans in a nearby supermarket. There weren’t many people there to see us and I was kind of annoyed and drunk. Not to mention nervous because a few of our friends had brought Pelle Almqvist from the Hives to see us and, well, I wanted to impress him. Naturally the opposite occurred. In our first song I knocked over a mic stand, maybe two, due to sheer enthusiasm I guess. The sound guy cut the sound and stopped us mid-song so he could walk up to the stage set the wobbly stand back up and threaten to kick us off if we disrespected their gear anymore. We did. And then their bathroom afterwards. So, needless to say, the Franks aren’t welcome back. I was being kind of a baby because things weren’t going my way but they were being dicks too. The guy at the bar wouldn’t turn off some dumb movie that was projecting on an adjacent wall while we were playing. Sometimes no respect deserves no respect.

It’s nothing but beautiful all around, of course. Stone cold fox.

Is there such thing as groupies these days? Do you guys have any?

What’s new with you guys?

We’re trying to figure that out actually. We’re taking June off to perfect our new songs so we can record another EP in July or August. And it looks like we have some paper work to deal with too. Ron and I are going to get our Hit City U.S.A. label off the ground a bit more. We’ll probably get tattoos and indulge in various vices. Look for us in July — worldly, rested and well assembled.

I honestly can’t remember. Ron says he secretly pukes a lot, though, which is a pretty funny thought. Last time for him it was in Hawaii because he got some nasty bug so it’s not too scandalous.

Last movie you saw in the theater?

Last time you took a shower?

Last time you had a crush? 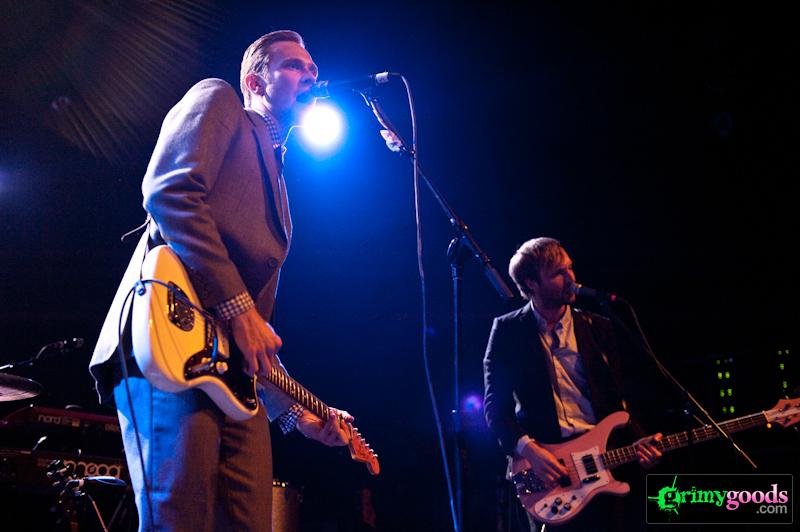