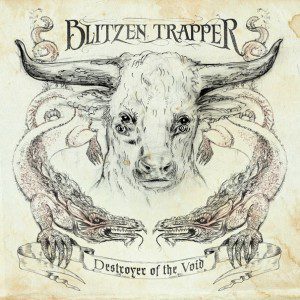 Portland, OR sextet Blitzen Trapper plays a familiar sound. As bandleader Eric Earley has been playing since the age of three, the sound of his youth is by far the most perceptible thing you’ll hear; The Beatles, Gram Parsons, Van Morrison, Young, etc bends through their latest (and fifth) LP, “Destroyer Of The Void” (Sub Pop).

Continuing on their breakthrough “Furr,” Earley and Co. have again managed to pack “Destroyer Of The Void” with all the Americana, sweep/strum Old West tradition that this band has fittingly branded themselves for. Tracks like the lazy “The Man Who Would Speak True” and “Below The Hurricane” could be endearingly paired with some serene and sun-setting wooded cabin landscape whereas “Heaven and Earth” plays as a piano-thick ballad for the Eleanor Rigby kids and opener “Destroyer of the Void” is dotted with some Queen-like glam.

Like previous efforts, this is certainly a likable album; it’s roostie yet florid, shaking yet soothing, all the while maintaining a flawless book ending with its production quality. It knows just how far it can take you from one feeling to another without letting you ever think it was recorded anytime after 1979. The finest thing about “Destroyer Of The Void” is that it’s not simply a rehash of just one trad-rock god’s sound, but rather it’s a puddle-jump through the best of them, song after song, era-after-era. The only thing I dislike about it is the silly metal-band sketch on the album cover.