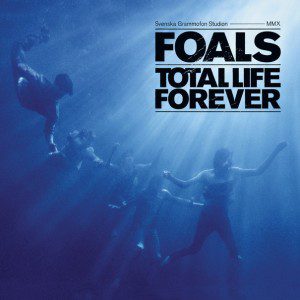 It’s been two years since Foals’ debut album, “Antidotes,” garnered success with their danceable, kinetic math rock.  With the release of their sophomore album, “Total Life Forever,” on June 15, 2010 through Subpop Records (US), the five piece Oxford band shows a departure from the jittery math rock sounds of “Antidotes” and instead delivers a more subdued, serious piece of work.

The album cover (taken by Steve Gullick) conveys exactly what “Total Life Forever” sounds like.  It shows the band members submerged in deep blue waters; they’re floating with sparkling sunlight shining on the surface.  Essentially, the album feels like a hypnotic, melancholy dream with pockets of brightness.

The first single off the album, “Spanish Sahara,” starts off with minimal instruments only to reach a surprisingly powerful crescendo.  Since this was the first song I heard before the release of the album, I had my initial reservations with regards to the change in Yannis Philippakis’ vocals.  His falsetto (a la Bon Iver) threw me off guard but once the song exploded midway, I knew this was still signature Foals.  “Spanish Sahara” is a perfect example of the beauty of this album; although the majority of the track sounds somber enough to make Bright Eyes seem like cotton candy, the struggle and climax of “Spanish Sahara” makes it an interesting journey.

As far as lyrics, Foals delivers more intimate verses than those found on their previous album.  Critics came down on the cryptic and at times nonsensical lyrics on “Antidotes” but the new album seems lyrically reflective with hints of bitterness.  Even “Miami,” the up-tempo track with a head bop worthy bass line (courtesy of bassist, Walter Gervers), presents lines like, “You don’t mind picking up salt to rub into my wounds.” Similarly, “Black Gold” contemplates how “the future is not what it used to be.” The repetition of lyrics and increased use of vocal choruses induces a hypnotic state for the listener.

“Total Life Forever” masterfully alternates between complexity and simplicity to create a cavernous, atmospheric sound.  The songs are rich with imagery.  Take for instance the beginning of “The Orient” – something as simple as echoing vocals conjures up images of birds chirping.  It’s a cheerful way to start off the graceful love song.  With imagery in mind, it would be criminal to not acknowledge their music videos directed by Dave Ma.  The cinematography complements the music so beautifully that watching a video becomes a full sensory experience.

As much as I admire this album, I don’t care much for the last few tracks.  They feel lethargic and aimless but maybe I simply need to stop playing the first part of the album on repeat and give the latter tracks a more thorough evaluation.

The album is still danceable but less aggressive especially in terms of percussion.  Jack Bevan is one of my favorite drummers (especially live) because he doesn’t hold back but this is a good move towards something different.  The tracks are stirring and the structure of containment makes you feel like there’s something brewing and about to explode.  Guitarists, Yannis and Jimmy Smith, still retain staccato picking and the songs create excellent build-ups.  Edwin Congreave provides keyboards to round off the album with a full sound.  The lyrics manage to be vulnerable and jaded without boring the listener with obvious lines.  I feel like I’m listening to something that’s alive and breathing.  Foals didn’t disown their previous musical identity but instead built upon their strengths to produce a smooth and brilliant second album.

They’re currently on a massive tour throughout Europe with some dates in Australia and Japan.  Unfortunately, their only U.S. show announced so far is at the Austin City Limits Music Festival in October.