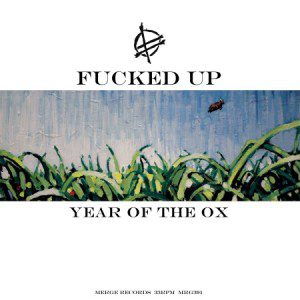 Looks like Merge Records is giving us another kick ass album stream today. If Versus’ album stream was a lil to soft for your taste, check out hardcore rockers Fucked Up’s new album “Year of the Ox” in all its Fucked Up entirety! Their fourth album is set for a limited-edition 12-inch and digital release on September 28, 2010 but you can get your heavy listening on now.

Recorded over 6 months by Jon Drew at Giant Studios in Toronto, “Year of the Ox” is the band’s fourth record in a continuing 12-year cycle and adds to its evolving retinue of guest musicians. The patient and building “Year of the Ox” features Nika Rosa Danilova of Zola Jesus for a guest vocal passage and Toronto’s string quartet, New Strings For Old Puppets. The b-side “Solomon’s Song”, a gothic vampire love tribute to Twilight, features a five-minute saxophone solo from Aerin Fogel of the Bitters and heavy synthing from Trust.

Stream Fucked Up’s entire “The Year of the Ox” here!