When terms like “dream pop” get thrown around, usually it draws the mind to synth-y airy music that still has a catchiness about it. Layered and elaborate this pop can often get so swept up in experimentation and its own psychedelic haze that it becomes mundane without some hallucinogenic drug trance on the listener. Yet, Secret Cities found a way to part the clouds of dream pop, and create rays of sunshine that penetrate the humid conditions in the best way possible.

The North Dakota threesome also succeeds at making a cohesive mix-tape with “Pink Graffiti.” There is definitely diversity, but well balanced in a thought-out, intentional way that by the end, you understand the journey the band was taking you on. This all sounds very good, but heady and ethereal, but that’s another beautiful attribute to this album, it’s accessible and universal. Definitely don’t be surprised if their tunes pop up in the background of some films or television shows. They strike that chord of being both unique, but instantly likable. Their catchy hooks and melodies mixed with angelic, warmed-fogged vocals are so welcoming.

The layers of the tunes are thick using instrumentation that you can’t usually pinpoint exactly what you are hearing. Handclaps over xylophone with pipes or a recorder swirling with muted vocals create an intoxicating earful of jamy goodness.

The opener, “Pink City” is full of sound and purposeful drumming that opens to simple hand claps with gentle hums and buzzes, and then those lush vocals pop up. The album is supposed to be inspired by The Beach Boys’, Brian Wilson, and nowhere do you hear that influence more than on the track that whispers his name, “Boyfriends.” Captivating whistles alternate against sunny tambourine, and make this shimmery little tune. Don’t skip around when you listen, but here, skipping to the highlight of the album track eight, “Pink Graffiti Part 1.” This stunner opens spooky and mystical, and quickly lightens to a mix of bells, whistles, then slap dashed with playful scratches to create a happy, sweet simple track, that isn’t actually simple at all.

Sure, there are some moments where they have a little trouble pushing through the fog, and others where they might ponder in it just a little too long, but overall “Pink Graffiti” is entrancing. Each time you listen, expect to hear something a little different as they orchestrated beautiful layers, but didn’t get so caught up in experimentation that they loose their pop appeal. Can’t say that a North Dakota crew making an album about a Beach Boy is typical, but that’s just what makes it so good. 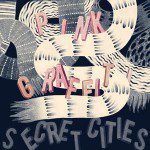