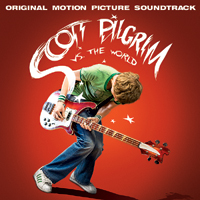 Even the hyper-kinetic trailer makes this movie look more subdued than it really is.  Director Edgar Wright is already not known for his restraint. Here, in adapting the comic, he places the audience in the mindset of someone voraciously pouring through the whole Scott Pilgrim series as fast as they can, figuring maybe they’ll go back again later to sort out what was happening. The cuts come so fast and furious that near the end of the film, lingering long enough to actually see a shoe being tied plays for big laughs.

The plot moves almost too quickly to give a detailed synopsis: Canadian bassist Scott (Michael Cera) meets Ramona (Mary Elizabeth Winstead), the American girl of his dreams, but everyone warns him she’s bad news. They start a fling, but he soon finds that a shadowy “League of Evil Exes” will descend on him to battle (sequentially, thankfully, rather than all at once) for control of Ramona’s love life.

The battles run the gamut from swordplay a la Kill Bill, to wacky Bollywood dance-fighting.  These are a literal version of that part a relationship when the people you’ve each dated in the past start popping up in conversation and causing arguments. Maybe you recall this subject matter being tackled before in a movie, with mixed results. By necessity, our star-crossed lovers do a lot of quarreling and moping when they’re around each other so we would have benefited from a scene or two showing us why, if not for the battles, Scott and Ramona would be the super couple of the century. So while the love story could have had more resonance, enough craziness is going on around it to keep you more than sufficiently distracted from the lack of chemistry. Prizes for acting aren’t likely, but newcomer Ellen Wong does a lot of emotional heavy lifting, and Jason Schwartzman, of course, stands out in his second douchebag role in-a-row.

The music in Scott Pilgrim vs. The World is the most authentic detail of all. Scott’s band, Sex Bob-Omb, plays a raucous, Stooges-style face-melter during the Stan Brakhage-style opening credit sequence, the raw power of which cannot be denied. Later, Scott’s ex-girlfriend plays a more commercial brand of heavy rock; catchy, but deserving of hipster ire. Even background music like The Black Lips’ “Oh Katrina,” on the PA system at a concert venue oozes “scene” familiarity. Later, at a devastating moment for Wong’s character, a seventeen year-old girl, we get Broken Social Scene’s “Anthems For a Seventeen Year-Old Girl.”

Like “Sin City” and “300” before it, I walked away with the feeling that I had watched something other than live action or animation. The term “comic book movie” needs to branch out from simply meaning “movie based on a comic book” and refer to movies like this, that really capture what’s awesome about reading comics.

2 thoughts on “Scott Pilgrim vs. The World – Movie Review”