I have one word for this album: hypnotic. Your experienced music mind might think I’m talking about trippy psychedelic sounds but that is not the case with Eternal Summers’ debut full-length album “Silver.” Some how this duo’s creations make me feel hypnotized with their poppy upbeat tunes. After hitting play I don’t want to write about it. I don’t want to read their press release and learn more about them. All I want to do is listen, experience and enjoy.  Flashes of images come up when listening to this candy. A short list of those images being: 1. That scene in “Valley Girl” where the girls are dancing around at their little slumber party and 2.  Jem and The Holograms.  Don’t ask me why but that’s what I get.

This album is full of pleasurable songs. It commences with a cutesy little short burst of a song titled “Disciplinarian.” Yes, I totally hear what you’re talking about and agree with these lyrics! This song is an anthem to us procrastinators that blame school for only teaching us how to get things done when structure and forced discipline is involved and as soon as that’s taken away (i.e. we graduate) we are all lost. True. True …  The simplistic style of these pretty little tracks is so refreshing and catchy I want to sing along right away. I noticed and think it’s interesting that both of these singers have a slight English accent when they sing although they are from Virginia. Hmmm …  maybe that’s just me being too observant. The track “Running High” makes me wish I was at an Eternal Summers show so that I can jump up and down in a plaid pleated skirt like a little school girl. It’s too much fun! Nicole Yun’s voice truly is attractive in the sense that you can listen to it for hours-on-end and there’s not one track on this album that makes this statement false. Wow, I suddenly feel like their PR person.

“Silver” is out September 28th and if I were you I’d be jealous of me for already having it.  Listen. Love. Sigh… 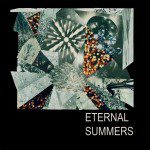