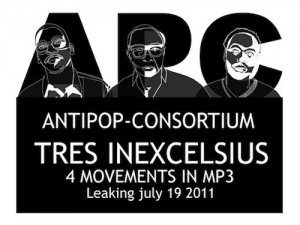 New York hip hop group, Anti-Pop Consortium (APC) have been tweeting clues the past couple months about their upcoming new album. With the group originally consisting of Beans, High Priest, M. Sayyid and producer Earl Blaize, the men are back with some bangin’ new tracks that just leaked! We’re not too sure if Beans is working on their latest album since pursuing his solo career, but APC is ready to share four new tracks. This is their first batch of new music since the release of their fourth studio album Fluorescent Black in 2009. It looks as though APC is titling their new album Tres Inexcelsius. However, that could just be the name of the 4-track leak. You can listen to all their new tracks below via their brand new Facebook page or their Myspace.

Stay tuned for more leaks from APC! Also, APC have been working working with Modeselektor on their new album, Monkeytown.