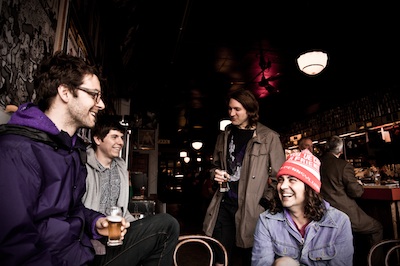 Back in August I reviewed The War on Drugs’ sophomore album Slave Ambient.  I suggested at the time that you “get your paws on that shit.”  Now it’s time for you to get your paws on some tickets to their show as they hit The Satellite stage on Saturday, Oct. 22.  Purling Hiss and Carter Tanton open, so get ready to jam!

You must have a Twitter or Facebook to enter the contest. First make sure you’re following Grimy Goods on Twitter here and/or “like” our Facebook page here. We’ll pick winners on Thursday, October 2o. The winners will be direct messaged on Twitter or contacted below their contest entry comment on the Grimy Goods Facebook page. Winners will have until noon Friday, October 21 to claim their win or the tickets will be forfeited. To increase your chances, enter the contest both ways!

Via Twitter: Tweet us a message telling us what is your favorite War on Drugs song! Be sure to send your Tweet to @GrimyGoods, mention @warondrugsjams and use the following hashtag: #ContestWOD

Via Facebook: just leave a comment on the Grimy Goods Facebook page telling us what is your favorite War on Drugs song! Be sure to mention The War on Drugs at The Satellite so we know which contest you’re entering!