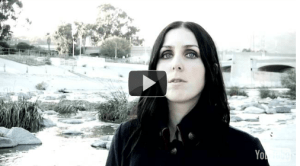 The dark and elusive, Chelsea Wolfe performed last night at the Satellite in Silver Lake. The Los Angeles songstress has just released a sick new video for her brand-spankin’ new track, “Sunstorm.” A much less abstract song compared to her work on her 2011 release, Ἀποκάλυψις — the song is quite simple with urgent piano keys and a set of repetitive lyrics. Listen closely though, the lyrics are pretty damn sad.

The video was directed by Sean Stout of Terror Eyes TV and it’s shot and edited very well. Almost like a montage out of David Lynch flick. Check it out below and let us know what you think.