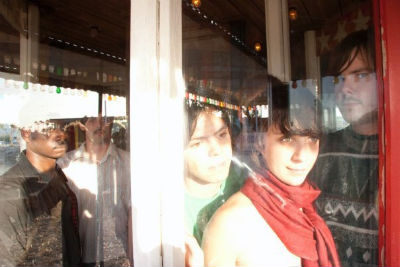 Long Beach band of noise makers Crystal Antlers bring their garage avant-psych freak out to the Echo on Thursday, March 8.  Their sophomore album Two-Way Mirror was just released in Summer 2011 but per their website they’ve already got a gang of new songs they’ll be playing live for the first time at this show, their first LA gig in over 3 months! You don’t wanna miss this!  Sleepy Sun and Feeding People support.

You must have a Twitter or Facebook to enter the contest. First make sure you’re following Grimy Goods on Twitter here and/or “like” our Facebook page here. We’ll pick winners on Tuesday, Mar. 6. The winners will be direct messaged on Twitter or contacted below their contest entry comment on the Grimy Goods Facebook page. Winners will have until noon Wednesday, Mar. 7 to claim their win or the tickets will be forfeited. To increase your chances, enter the contest both ways!

Via Twitter: Send a Tweet to @GrimyGoods telling us why we should hook you up with tickets! Mention @CrystalAntlers and be sure to include the following hashtag in your Tweet: #ContestCA

Via Facebook: Just leave a comment on the Grimy Goods Facebook page telling us why we should hook you up with tickets! Be sure to mention Crystal Antlers at the Echo so we know which contest you’re entering!