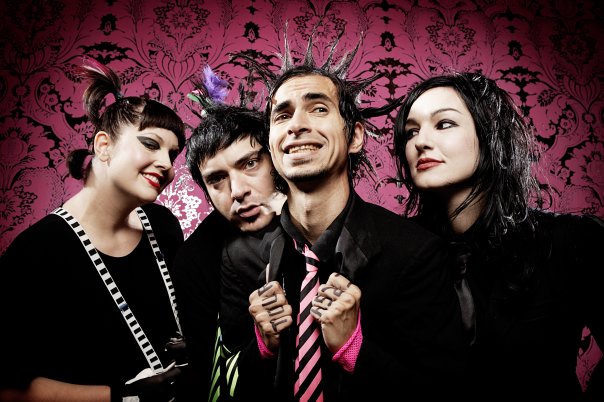 Classified as “electronic punk,” Mindless Self Indulgence’s music is more like a buffet of various genres, including punk rock, alternative rock, electronica, hip-hop, and industrial. Formed in New York in 1997, the group’s music is influenced by early 1980s culture and frequently contains samples of early 80’s hip-hop or rock, as well as chiptune-style beeps and tones. They have opened for a number of mainstream acts, including System of a Down, Korn, Rammstein, and My Chemical Romance and now they’re stopping in L.A. on Saturday, March 31, 2012 at Club Nokia to entertain fans with their eclectic tunes as Hyro Da Hero starts the show!

You must have a Twitter or Facebook to enter the contest. First make sure you’re following Grimy Goods on Twitter here and/or “like” our Facebook page here. We’ll pick winners on Thursday, March 29. The winners will be direct messaged on Twitter or contacted below their contest entry comment on the Grimy Goods Facebook page. Winners will have until 10 am Friday, March 30 to claim their win or the tickets will be forfeited. To increase your chances, enter the contest both ways!

Via Twitter: Tell us why you should win Mindless Self Indulgence tix! Be sure to send your Tweet to @GrimyGoods, mention @msi and use the following hashtag: #ContestMindless

Via Facebook: just leave a comment on the Grimy Goods Facebook page  telling us why you deserve some free tix! Get creative! And be sure to mention Mindless Self Indulgence at Club Nokia so we know which contest you’re entering!