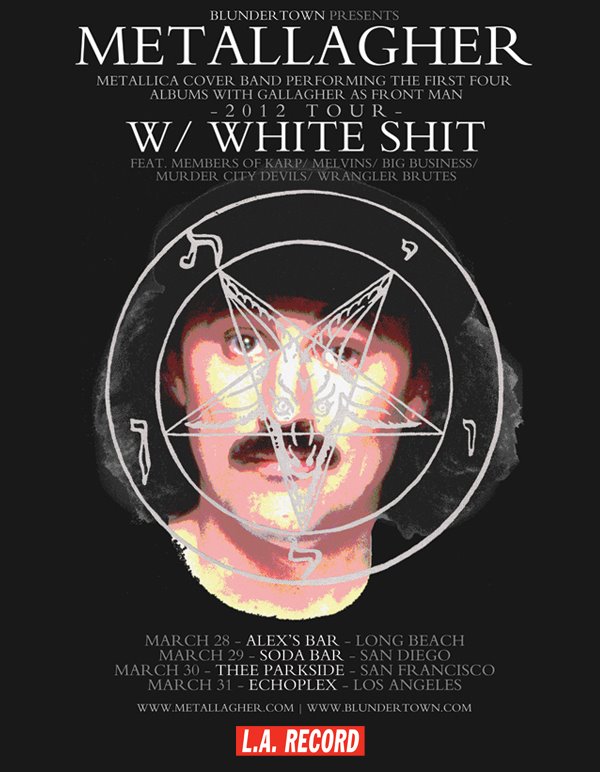 Metallagher… the way Metallica is supposed to be. Yup, you’re in for a very hardcore rock show as you headbang to tunes your favorite old school Metallica songs played with front man Gallagher. Basically, it’s going to be a night of musical mayhem with Metallagher and opening acts, White Shit, Death Hymn Number 9 (one of our favorites) and Mikki & the Mauses all tearing up the Echoplex this Saturday, March 31. See you there (and don’g forget your umbrella)!

You must have a Twitter or Facebook to enter the contest. First make sure you’re following Grimy Goods on Twitter here and/or “like” our Facebook page here. We’ll pick winners on Thursday, March 29. The winners will be direct messaged on Twitter or contacted below their contest entry comment on the Grimy Goods Facebook page. Winners will have until 10 a.m. Friday, March 30 to claim their win or the tickets will be forfeited. To increase your chances, enter the contest both ways!

Via Twitter: Send a Tweet to @GrimyGoods telling us why we should hook you up with tickets!  Be sure to send your tweet to @GrimyGoods, mention @metallagher and be sure to include the following hashtag in your Tweet: #ContestMetal

Via Facebook: Just leave a comment on the Grimy Goods Facebook page telling us why we should hook you up with tickets! Be sure to mention Metallagher at the Echoplex so we know which contest you’re entering!