Last Tuesday’s Check Yo Ponytail was off the muthafuckin’ hook. It wasn’t because of the pop-electro princess, Oh Land—and it wasn’t for the one-man-band, Blood Orange (Devonté Hynes). Fans came out early to pack the Echoplex for the hottest new electronic duo, Trust. Touring in support of their debut album, TRST, it was a spectacular evening to remember.

Hailing from Toronto, the industrial electronic dance newbies blew minds with a powerful performance of hard-hitting beats, electrifying lights and the charming deep vocals of Robert Alfons. Accented in an illustrious manner by the pounding rhythm of drummer, Maya Postepski (of Austra), the two were also joined by a third member on the keyboards. Straight from the beginning of their first song, the crowd was immediately entranced by the presence of a slender and handsome, Alfons. Swaying from side-to-side as he sang into the mic in an almost aloof tone—fans were already screaming with joy. Alfons gyrated to the pulsating drum rolls of Postepski as bombastic beats and effects radiated throughout the Echoplex. Just about everybody in the room was grooving to Trust’s hypnotizing beats.

As soon as their hit single, “Bulbform” came into play—Trust titillated the crowd with their unique freestyle of breaks and build-up leading to the steamy climax of the track where the energy of the Echoplex was on fire. Before you knew it, everyone in the pit was dancing.

Considering the quality of their performance and the amount of crowd engagement they received, Trust should have headlined above Oh Land. It was clear that the majority of the crowd was at the Echoplex to check out Trust’s debut. Although there were people digging the sounds of both Blood Orange and Oh Land, it didn’t compare to the people dancing about for Trust. Not to mention, the crowd thinned out a bit after Trust’s performance and the ones that remained were off in their own conversations or bar fun towards the back. I witnessed this with my own eyes as I migrated to the back of the room to take note of the crowd change.

While Blood Orange, the one-man-band, was a vivid mix of soulful and electrifying sounds with a side of psychedelic flavor—Oh Land was a theatrical beauty full of electro melodies. However, Trust was the highlight of the night. I’ve never seen a first slot opener pull so many bodies into the Echoplex, let alone fully engage them with their performance.

Trust will be performing at an unofficial Coachella party this Sunday, April 22 in the desert.
RSVP here! 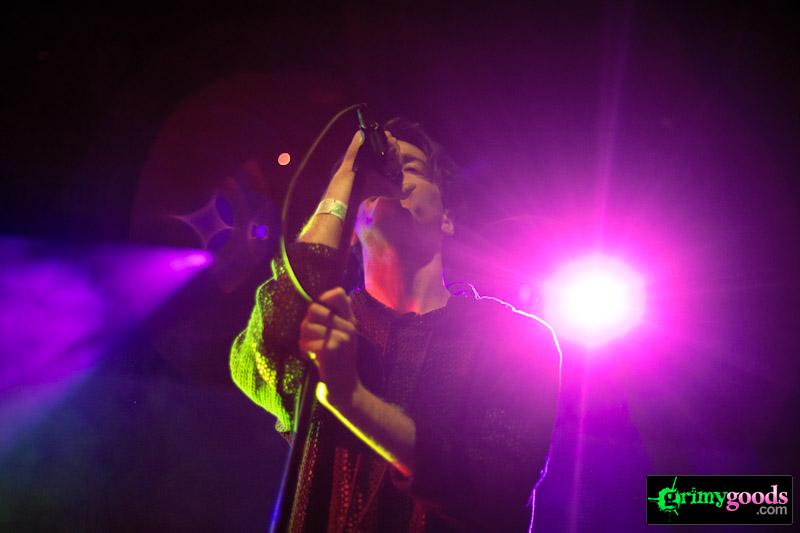