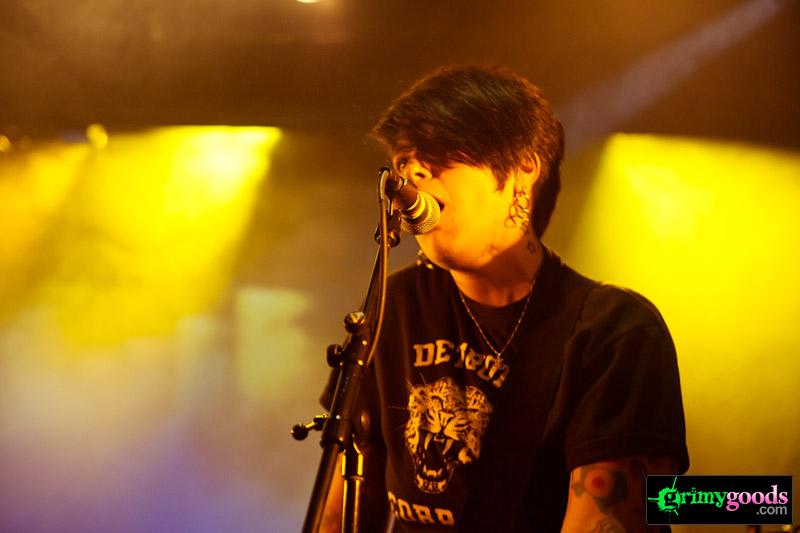 Girl In A Coma at the Echoplex – Photo: Monique Hernandez

Girl in a Coma formed with  best friends Jenn Alva and Phanie Diaz met in Jr-high school art class over a mutual love of the Smiths, Nirvana, and skipping school, then came singer Nina Diaz, who joined the band at age 13. Over the years their melodic tunes have captured the hearts of numerous fans and comrades along the way, including Joan Jett who signed them—Morrissey, Sia, Tegan and Sara, The Pogues and Amanda Palmer who have hand selected them for tours. In addition, Robert Rodriguez asked them to compose one of the key songs for his film Machete last year. The girls will be perfuming at the Echoplex on Friday, April 27, 2012, along with other acts Pinta Protest, Sara Radle and Honorable South.

You must have a Twitter or Facebook to enter the contest. First make sure you’re following Grimy Goods on Twitter here and/or “like” our Facebook page here. We’ll pick winners on Wed, April 25. The winners will be direct messaged on Twitter or contacted below their contest entry comment on the Grimy Goods Facebook page. Winners will have until 10 a.m. Thursday, April 26 to claim their win or the tickets will be forfeited. To increase your chances, enter the contest both ways!

Via Twitter: Send a Tweet to @GrimyGoods telling us why we should hook you up with tickets!  Be sure to send your tweet to @GrimyGoods, mention @girlinacoma and be sure to include the following hashtag in your Tweet: #ContestComa.

Via Facebook: Just leave a comment on the Grimy Goods Facebook page telling us why we should hook you up with tickets! Be sure to mention Girl in a Coma at the Echoplex so we know which contest you’re entering!