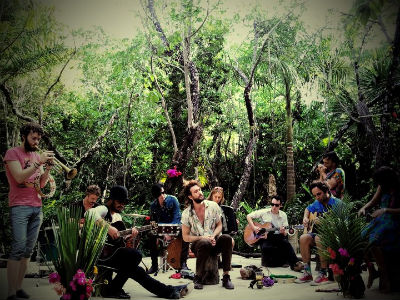 Edward Sharpe & the Magnetic Zeros kick things off at the Greek Theater on Friday, May 4.  The beloved LA folk rockers, led by frontman Alex Ebert, have blown up in just a few short years but their heartfelt, down-home tunes still ring true.  Their new album Here officially drops on May 29 but you don’t have to sit around and wait, you can catch them live.  What better way to usher in the Summer concert season that with the sweet n’ wild tunes of Edward Sharpe & the Magnetic Zeros! Special guest, songwriter Aaron Embry supports.
Tickets to the show are $40.75 and this show starts at 7:30 p.m.  Enter the contest below for a chance to win a pair of tickets!

You must have a Twitter or Facebook to enter the contest. First make sure you’re following Grimy Goods on Twitter here and/or “like” our Facebook page here. We’ll pick winners on Tuesday, May 2. The winners will be direct messaged on Twitter or contacted below their contest entry comment on the Grimy Goods Facebook page. Winners will have until 10 a.m. Wednesday, May 3 to claim their win or the tickets will be forfeited. To increase your chances, enter the contest both ways!

Via Twitter: Tell us what your favorite thing about Summer is! Send your Tweet to @GrimyGoods, mention @EdwardSharpe and be sure to include the following hashtag in your Tweet: #ContestESMZ

Via Facebook: just leave a comment on the Grimy Goods Facebook page telling us what your favorite thing about Summer is! Be sure to mention Edward Sharpe & the Magnetic Zeros at the Greek Theater so we know which contest you’re entering!

For more cool shows coming up at the Greek Theatre click here. To enter other Grimy Goods contests, click here.