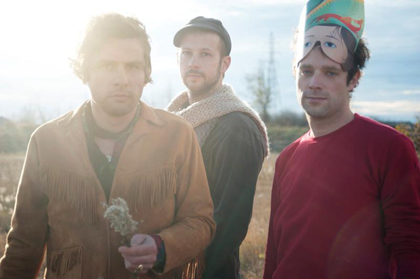 The Canadian indie-rock band, Plants and Animals, are ready to rock your musical universal when they play The Satellite on Saturday, May 19, 2012. Starting off as an instrumental band in 2002, they’ve since then evolved into the group you’ve all come to know and love. Often describing their music as post-classic rock, the group released their third effort, The End of That, this past February and want to share some goodies from their new album with YOU! They’re be sharing the stage with Warships, Kasey Anderson and Star Anna.

You must have a Twitter or Facebook to enter the contest. First make sure you’re following Grimy Goods on Twitter here and/or “like” our Facebook page here. We’ll pick winners on Thursday, May 17. The winners will be direct messaged on Twitter or contacted below their contest entry comment on the Grimy Goods Facebook page. Winners will have until 10am Friday, May 18 to claim their win or the tickets will be forfeited. To increase your chances, enter the contest both ways!

Via Twitter: Why should we hook you up with tickets! Be sure to send your Tweet to @GrimyGoods, and mention “@plantandanimal @TheSatelliteLA” and use the following hashtag: #ContestAnimal.

Via Facebook: Just leave a comment on the Grimy Goods Facebook page telling us why we should hook you up with tickets! Be sure to mention Plants and Animals at The Satellite so we know which contest you’re entering!