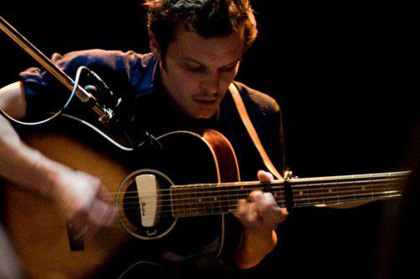 Kristian Matsson’s musical talents perfectly matches his grandiose moniker of The Tallest Man on Earth. The very talented singer/songwriter from Dalarna, Sweden has been entertaining the masses since 2006 and  has seen then released two full-length albums and two Eps, all of which were recorded and produced in wherever he was currently living at the moment. With a powerful connection between his voice and guitar, Matsson’s charismatic stage presence will delight fans when he plays the Wiltern on Tuesday, June, 12, 2012.

Tickets to the show are $25-$32 (excluding handling fees) and the show starts at 7:30 pm.  Thanks to our friends at Live Nation, who provided us with a few pairs of tickets to give away!

You must have a Twitter or Facebook to enter the contest. First make sure you’re following Grimy Goods on Twitter here and/or “like” our Facebook page here. We’ll pick winners on Monday, June 4, 2012. The winners will be direct messaged on Twitter or contacted below their contest entry comment on the Grimy Goods Facebook page. Winners will have until 10 am Tuesday, June 5 to claim their win or the tickets will be forfeited. To increase your chances, enter the contest both ways!

Via Twitter: Tell us why we should hook you up with tickets! Be sure to send your Tweet to @GrimyGoods, mention “@tallestman @Wiltern” and use the following hashtag in your Tweet: #ContestTallest.

Via Facebook: just leave a comment on the Grimy Goods Facebook page telling us why we should hook you up with tickets! Be sure to mention The Tallest Man on Earth at the Wiltern so we know which contest you’re entering!