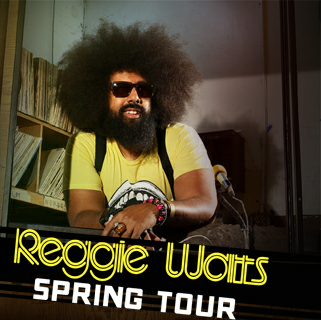 Reggie Watts, internationally renowned vocalist/ beatboxer/ musician/ comedian/ improvisor, wows audiences with his unpredictable performances which are created on-the-spot using only his formidable voice and looping pedals. Blending and blurring the lines between comedy and music, Watts will headline The Fonda Theatre on Wednesday, May 30! This is gonna be a dope show! Don’t miss it! Tickets are $27.50 and the show is ALL AGES. Thanks to our friends at Goldenvoice we have some free pairs to give away. Enter the contest below to win a pair!

You must have a Twitter or Facebook to enter the contest. First make sure you’re following Grimy Goods on Twitter here and/or “like” our Facebook page here. We’ll pick winners on Monday, May 28. The winners will be direct messaged on Twitter or contacted below their contest entry comment on the Grimy Goods Facebook page. Winners will have until 10 a.m. Tuesday, May 29 to claim their win or the tickets will be forfeited. To increase your chances, enter the contest both ways!

Via Twitter: Where did you first hear about Reggie Watts? Send your Tweet to @GrimyGoods, mention “@ReggieWatts at @TheFondaTheatre” and be sure to include the following hashtag in your Tweet: #ContestWatts

Via Facebook:  Where did you first hear about Reggie Watts? Leave a comment on the Grimy Goods Facebook page with your entry. Be sure to mention Reggie Watts at the Fonda so we know which contest you’re entering!