Coining themselves as a “Northern Light electronica duo from Sweden,” the Deer Tracks made their Los Angeles debut at the Bootleg Theater last week. Taking the stage in rather eccentric attire accented by very large false eyelashes (even worn by the males), immediately we knew this was going to be an interesting show, even if the music wasn’t going to be the best. Lucky for the slim crowd, the music was GREAT. Their music is delicate yet, pulsating and powerful—it’s sexy and mysterious and something you should start listening to—like, now.

The duo, composed of David Lehnberg & Elin Lindfors—two very eccentric and immensely talented multi-instrumentalists and singers, are joined by a drummer and hot-mod babe on the keyboards for their live shows. Utilizing  the most non-traditional instruments such as a melodica, small music boxes, glockenspiels, forks, coffee mugs and even a saw—the Deer Tracks fascinate with their unique selection on music-makers that produce their sultry mix of lush electronic-pop music. Elin is a petite songbird. At first glance she resembled a forest pixie with her long blond hair, fair skin and shoe-less stage presence. Her voice is delicate, lovely and capable of reaching very high notes. However, don’t let her sweet femininity fool you—the girl busts open a can of badass when she whips out that saw and plays it like a violin, creating the most enchanting sounds.

Elin’s bandmate, David, is a stage show in his own with his flamboyant persona and  striking features. The boy had some serious stage swagger as he bounced around dancing with his guitar or punching the pads. His powerful stage presence and harmonic vocals are absolutely engaging—you can’t help but stare at him.

The Deer Tracks make music that is captivating and damn catchy with sugary electro hooks. There is definitely something magical about the duo. Perhaps the fact that they recorded their music in granny’s remote cabin in the Swedish wilderness with no phone lines, no friends and one barely working computer. The fruitful result was the Deer Tracks’ epic The Archer Trilogy. The trilogy is now releasing as their U.S. debut in three parts: Pt. 1, a five-song EP released last March; Pt. 2: a full album to be released on July 5. And Pt. 3 – yet to be revealed as the final installment.

Keep a sharp eye on these magical forest nymphs, for the Deer Tracks are a very promising duo with a bright future. Although their studio recordings are bewitching, they are nothing compared to their live show. You need to see the Deer Tracks live—it’s a stunning experience and each one is made to be unique.

Oh, we also got some sweet photos of Nouela! Check them out int he photo gallery below! 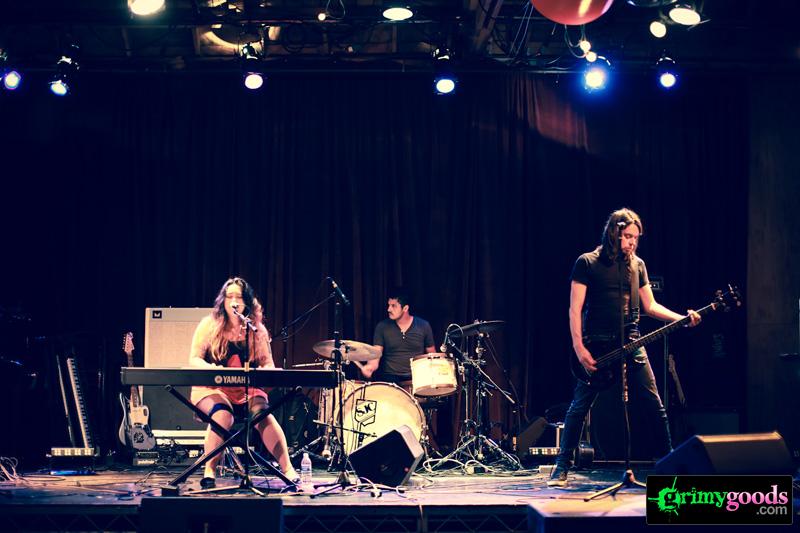