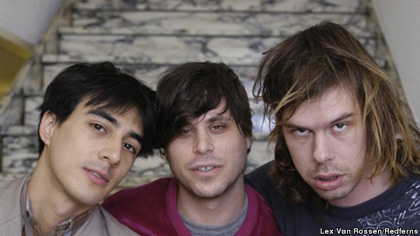 The Liars will be headlining The Fonda Theatre this Friday, June 22, 2102. Even though their music is usually lumped into the New York dance-punk scene of the early 21st century, they like to think of themselves as a very versatile group that draws inspiration from the late 1970’s British post-punk movement. The three-piece band, consisting of Australian-born Angus Andrew (vocals/guitar), Aaron Hemphill (percussion, guitar, synth), and Julian Gross (drums), will provide one kickass show you won’t want to miss!

Tickets are $31.10 (including fees) and the show is ALL AGES, with the show starting at 8pm. Thanks to our friends at Goldenvoice we have some free pairs to give away. Enter the contest below to win a pair!

You must have a Twitter or Facebook to enter the contest. First make sure you’re following Grimy Goods on Twitter here and/or “like” our Facebook page here. We’ll pick winners on Tuesday, June 19. The winners will be direct messaged on Twitter or contacted below their contest entry comment on the Grimy Goods Facebook page. Winners will have until 10 a.m. Wed, June 20 to claim their win or the tickets will be forfeited. To increase your chances, enter the contest both ways!

Via Twitter: Tell us why we should hook you up with tickets! Send your Tweet to @GrimyGoods, mention “Liars at @TheFondaTheatre” and be sure to include the following hashtag in your Tweet: #ContestLiars

Via Facebook: Tell us why we should hook you up with tickets! Leave a comment on the Grimy Goods Facebook page with your entry. Be sure to mention Liars at the Fonda so we know which contest you’re entering!