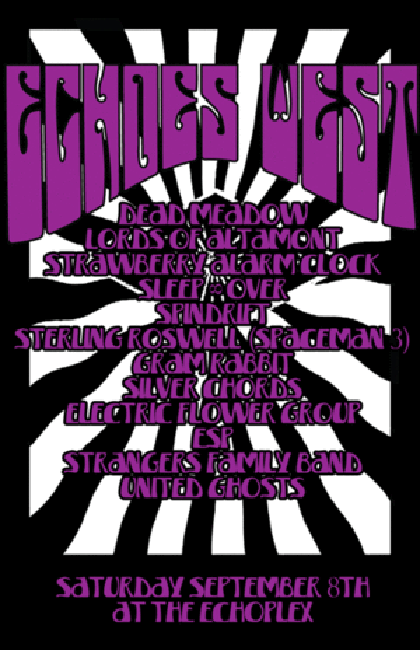 Get ready to get psychedelic at the Echoes West music fest that curated by the Echo and Sasha Vallely (SPINDRIFT) on Saturday, September 8, 2012 at the Echo and Echoplex! Performers for the day’s festivities include: Dead Meadow, Lords of Altamont, Strawberry Alarm Clock, Sleep Over, SPINDRIFT, Sterling Roswell, Electric Flower Group, Gram Rabbit, ESP, Strangers Family Band, The Silver Chords, United Ghosts plus more TBA later!

You must have a Twitter or Facebook to enter the contest. First make sure you’re following Grimy Goods on Twitter here and/or “like” our Facebook page here. We’ll pick winners on Wednesday, September 5. The winners will be direct messaged on Twitter or contacted below their contest entry comment on the Grimy Goods Facebook page. Winners will have until 10 a.m. on Thursday, September 6 to claim their win or the tickets will be forfeited. To increase your chances, enter the contest both ways!

Via Twitter: Send a Tweet to @GrimyGoods, and tells us why we should hook you up with tickets!  Mention “Echoes West at @TheEchoLA” and be sure use the following hashtag: #ContestIvan.

Via Facebook: Just leave a comment on the Grimy Goods Facebook page telling us why we should hook you up with tickets! Be sure to mention Echoes West at the Echo so we know which contest you’re entering!