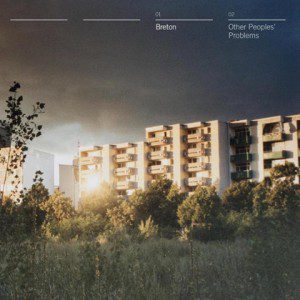 Get ready to have your mind blown as Breton takes center stage at the Echo on Tuesday, September 18, 2012! The artist is best know for mixing film and sound, providing fans with both audio and audio-visual autopsy; deconstructing and re-assembling popular culture. Seeing Breton live is an intense, hypnotic experience, as the band clad in black hoods perform to a backdrop of their films – the perfect marriage of sound and timing and rhythm and visuals – influenced by such heroes as Jonathan Glazer, Mike Leigh and Chris Cunningham. Joining the entertainment for the night will also be Michna and Mwahaha

You must have a Twitter or Facebook to enter the contest. First make sure you’re following Grimy Goods on Twitter here and/or “like” our Facebook page here. We’ll pick winners on Sunday, September 16. The winners will be direct messaged on Twitter or contacted below their contest entry comment on the Grimy Goods Facebook page. Winners will have until 10 a.m. on Monday, September 17 to claim their win or the tickets will be forfeited. To increase your chances, enter the contest both ways!

Via Twitter: Send a Tweet to @GrimyGoods, and tell us why you should win! Mention “@bretonlabs at @TheEchoLA” and be sure use the following hashtag: #ContestBreton.

Via Facebook: Just leave a comment on the Grimy Goods Facebook page telling us what you should win! Be sure to mention Breton at the Echo so we know which contest you’re entering!