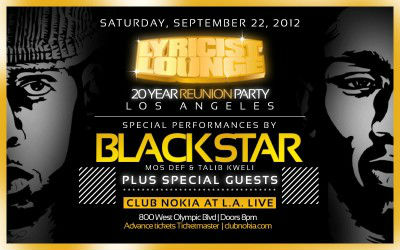 The Lyricist Lounge 20 Year Reunion Party is going off as they present the ultimate hip-hop duo Black Star (Mos Def aka Yasiin Bey & Talib Kweli) to rock the Club Nokia stage on Saturday, September 22.  The two lyrical forces came together back in 1998 to make the quintessential BlackStar album, and now they’re re-united for a few select performances and yes, it feels so good.  Hip-hop veterans Freestyle Fellowship, Del the Funky Homosapien and Pac Div support for a night of supreme beats and rhymes – not to be missed!

Tickets to the show are $39.75-56.  Doors are at 8 p.m., show starts at 9 p.m. and this show is all ages.  Thanks to our friends at Goldenvoice we have some tickets to give away!  Enter the contest below for a chance to win!

You must have a Twitter or Facebook to enter the contest. First make sure you’re following Grimy Goods on Twitter here and/or “like” our Facebook page here. We’ll pick winners on Thursday, September 20.  The winners will be direct messaged on Twitter or contacted below their contest entry comment on the Grimy Goods Facebook page. Winners will have until 10 a.m. Friday, September 21 to claim their win or the tickets will be forfeited. To increase your chances, enter the contest both ways!

Via Twitter:  Tell us why we should hook you up with tickets! Send your Tweet to “Hey @GrimyGoods,” mention “@MosDefOfficial and @TalibKweli at @clubnokia” and be sure to include the following hashtag in your Tweet: #ContestBlackStar.

Via Facebook: Just leave a comment on the Grimy Goods Facebook page telling us why we should hook you up with tickets!  Also, be sure to mention Black Star at Club Nokia so we know which contest you’re entering!