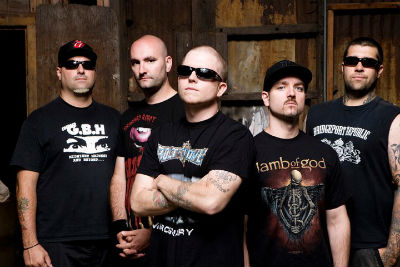 Connecticut’s hardcore/metal veterans Hatebreed play Fox Theater Pomona on Saturday, September 29.  Hatebreed are on their Fall headlining, 10 Years of Perseverance Tour, to commemorate the 10th anniversary of their groundbreaking 2002 album Perseverance.  The band also recently announced they’re working on a new album due for release in January 2013, so keep your ears open for new track teasers too.  Whitechapel, All Shall Perish and Deez Nuts support for an insane night of music.  Time to thrash, bedroom mosh and get crazy in the pit!

You must have a Twitter or Facebook to enter the contest. First make sure you’re following Grimy Goods on Twitter here and/or “like” our Facebook page here. We’ll pick winners on Thursday, September 27.  The winners will be direct messaged on Twitter or contacted below their contest entry comment on the Grimy Goods Facebook page. Winners will have until 10 a.m. Friday, September 28 to claim their win or the tickets will be forfeited. To increase your chances, enter the contest both ways!

Via Twitter:  Tell us why we should hook you up with tickets! Send your Tweet to “Hey @GrimyGoods,” mention “@hatebreed at @foxtheater” and be sure to include the following hashtag in your Tweet: #ContestHB.

Via Facebook: Just leave a comment on the Grimy Goods Facebook page telling us why we should hook you up with tickets!  Also, be sure to mention Hatebreed at Fox Theater Pomona so we know which contest you’re entering!