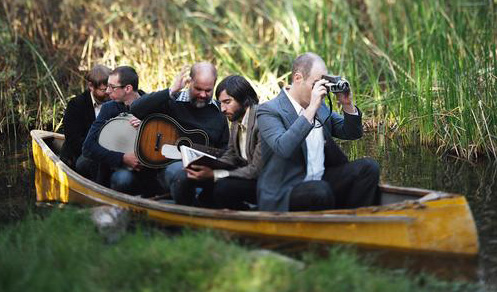 Ambient rock band The Album Leaf from San Diego play the Satellite on Saturday, September 29.  Started in 1998 by Jimmy LaValle as a solo musical project, he is known for his use of synthesizers and electronics as well as visual art during performances (which is common now with most ambient rock performers). Opening for them are Omniflux and Drew Andrews.

You must have a Twitter or Facebook to enter the contest. First make sure you’re following Grimy Goods on Twitter here and/or “like” our Facebook page here. We’ll pick winners on Thursday, September 27.  The winners will be direct messaged on Twitter or contacted below their contest entry comment on the Grimy Goods Facebook page. Winners will have until 10am Friday, September 28 to claim their win or the tickets will be forfeited. To increase your chances, enter the contest both ways!

Via Twitter: Tweet us why should we hook you up with tickets! Be sure to send your Tweet to @GrimyGoods, and mention “@thealbumleaf at @TheSatelliteLA” and use the following hashtag: #ContestTAL.

Via Facebook: Just leave a comment on the Grimy Goods Facebook page telling us why we should hook you up with tickets! Be sure to mention The Album Leaf at The Satellite so we know which contest you’re entering!