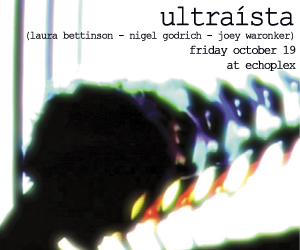 His production in the late 90s with Radiohead swelled some golden waves of sound. Heralded as a super-producer, Nigel Godrich is comin’ in hot with his new three-piece ensemble, Ultraísta. Spawned from a love of afrobeat, electronica and art, Godrich started the band with drummer Joey Waronker (The Smashing Pumpkins, Elliott Smith, Beck, R.E.M.). When it came to the vocals, instead of recruiting a well-known and already established vocalist, Godrich and Waronker took a different route by joining forces with Laura Bettinson — a London-based solo artist who until now, not many people across the pond knew didly about. The end result was the riveting creative effort, Ultraísta.

Ultraísta headline the Echoplex on Friday, Oct. 19 with support from Matthewdavid. This show is carrying a lot of hype and WILL SELL OUT. Tickets are priced at $14 – $16; show is 18-and-over. You can buy your tickets here or take a stab at winning a pair below!

You must have a Twitter or Facebook to enter the contest. First make sure you’re following Grimy Goods on Twitter here and/or “like” our Facebook page here. We’ll pick winners on Tuesday, October 16. The winners will be direct messaged on Twitter or contacted below their contest entry comment on the Grimy Goods Facebook page. Winners will have until 10 a.m. on Wednesday, October 17 to claim their win or the tickets will be forfeited. To increase your chances, enter the contest both ways!

Via Twitter: Start your Tweet with: “Hey @GrimyGoods” and tell us why you should win! Mention “@Ultra1sta at @TheEchoLA” and be sure use the following hashtag: #ContestUlt.

Via Facebook: Just leave a comment on the Grimy Goods Facebook page telling us why you should win! Be sure to mention Ultraísta at the Echoplex so we know which contest you’re entering!