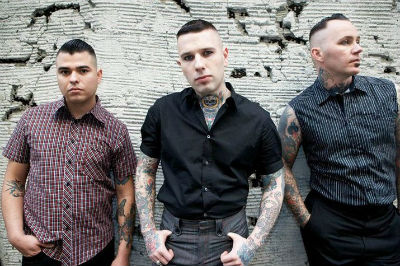 Kick off your Halloween festivities early with the badass psychobilly sounds of Tiger Army, who play the Fonda Theatre on Friday, October 26.  Led by mainstay front man Nick 13, Tiger Army hit Southern California on their 5th annual Octoberflame concert run, which includes a different set every night – no tricks, just musical treats.  With support from EXENE and the sweet mod soul of Suedehead, you can bet this is going to be one hell of a show!

Tickets to the show are $39.70 including service fees, doors at 7 p.m., show starts at 8 p.m. and this show is all ages.  Thanks for our friends at Goldenvoice we have some tickets to give away.  Enter the contest below for a chance to win!

You must have a Twitter or Facebook to enter the contest. First make sure you’re following Grimy Goods on Twitter here and/or “like” our Facebook page here. We’ll pick winners on Wednesday, October 24.  The winners will be direct messaged on Twitter or contacted below their contest entry comment on the Grimy Goods Facebook page. Winners will have until 10 a.m. Thursday, October 25 to claim their win or the tickets will be forfeited. To increase your chances, enter the contest both ways!

Via Twitter:  Tell us why we should hook you up with tickets! Send your Tweet to “Hey @GrimyGoods,” mention “@tigerarmynxdx at @FondaTheatre” and be sure to include the following hashtag in your Tweet: #ContestTA.

Via Facebook: Just leave a comment on the Grimy Goods Facebook page telling us why we should hook you up with tickets!  Also, be sure to mention Tiger Army at the Fonda Theatre so we know which contest you’re entering!

For more cool shows coming up at the Fonda Theatre click here.  To enter other Grimy Goods contests, click here.