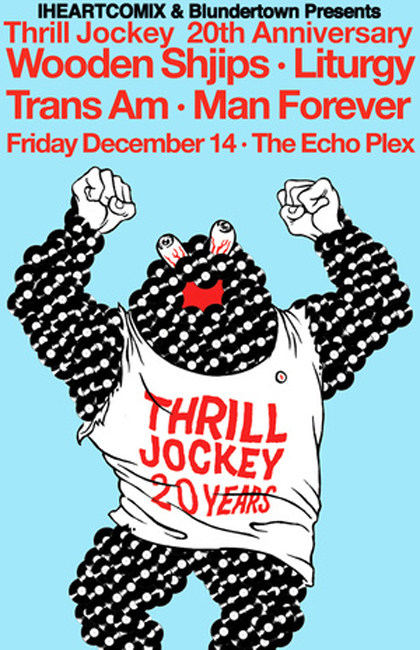 Blundertown and IHeartComix present  Thrill Jockey 20th Anniversary with Wooden Shjips on Friday, Dec. 14, 2012 at the Echoplex! Along with Wooden Shjips, other performers include Trans Am, Liturgy and Man Forever! With music that lends itself to exploration, Wooden Shjips’s music feature ghostly goals, obscured by dense layers of instruments, which makes them both mysterious and alluring.

First make sure you’re following Grimy Goods on Twitter here and/or “like” our Facebook page here. Next, email ggcontests@gmail.com with your full name for guest list and a clever reason why you want a pair of tickets to Thrill Jockey 20th Anniversary with Wooden Shjips at the Echoplex! When you’re done with your email, send us a Tweet so we know you entered the contest or you can post on our Facebook wall. We’ll select a winner that has done all of the above mentioned. Winners will be announced via email, Facebook and Twitter on Tuesday, Dec 11. Winners will have until 10am Wed, Dec 12 to reply back to our email and confirm their win.

FACEBOOK: Just leave a comment on our wall lettting us know you entered our contest for tickets to Thrill Jockey 20th Anniversary with Wooden Shjips, at the Echoplex.

For more cool shows coming up at The Echoplex/Echo, click here. To enter other Grimy Goods contests, click here.