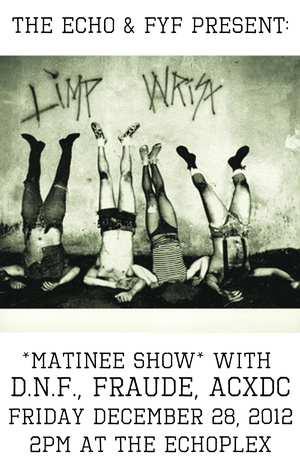 Check out Limp Wrist for a Matinee Show at the Echo on Friday, December 28, 2012 as they play with D.N.F., Fraude, and ACxDC. Limp Wrist is a  punk rock band, formed in Albany, New York back in 1998, with their musical style “short, fast hardcore music, and covers themes concerning the gay community in their live performances and lyrics”

Tickets are $8 – $10 (not including any fee’s), the show is all ages and doors open at 2 PM. Enter the contest below for a chance to win a pair of tickets, courtesy of our friends at the Echo.

First make sure you’re following Grimy Goods on Twitter here and/or “like” our Facebook page here. Next, email ggcontests@gmail.com with your full name for guest list and a clever reason why you want a pair of tickets to Limp Wrist at the Echo! When you’re done with your email, send us a Tweet so we know you entered the contest or you can post on our Facebook wall. We’ll select a winner that has done all of the above mentioned. Winners will be announced via email, Facebook and Twitter on Wednesday, Dec 26. Winners will have until 10am Thursday, Dec 27 to reply back to our email and confirm their win.

TWEET: Hey @GrimyGoods, I entered your contest for tickets to Limp Wrist at the @TheEchoLA ! #ContestLimp

FACEBOOK: Just leave a comment on our wall lettting us know you entered our contest for tickets to Limp Wrist at the Echo

For more cool shows coming up at The Echo, click here. To enter other Grimy Goods contests, clickhere.