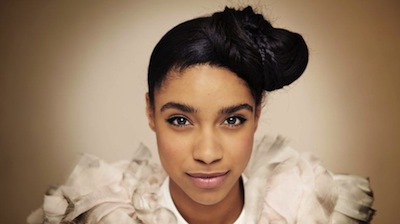 Lianne La Havas is an English folk and soul singer, songwriter, and multi-intrumentalist. Her taste in music started at a young age and her biggest influences come from her parents who are also involved with music. La Havas started her musical career in 2010 signing to Warner Bros. Records and released her first EP Lost & Found on October 21, 2011. Her career immediately gained popularity with TV appearances, touring with Bon Iver and Alicia Keys. Her latest album Is Your Love Big Enough? was named iTunes Album of the Year and continues to appear on BBC’s Two’s Later…with Jools Holland. La Havas is on the road and stopping by the El Rey with Jamie N Commons as a supporting act.

Tickets to the show are $22, doors open at 8pm, and it’s all ages. Enter the contest below to win free tickets!

First make sure you’re following Grimy Goods on Twitter here and/or “like” our Facebook page here. Next, email ggcontests@gmail.com with your full name for guest list and a clever reason why you want a pair of tickets to Lianne La Havas at the El Rey. When you’re done with your email, send us a Tweet so we know you entered the contest or you can post on our Facebook wall. We’ll select a winner that has done all of the above mentioned. Winners will be announced via email, Facebook and Twitter on Friday, March 15. Winners will have until 10am, Saturday March 16 to reply back to our email and confirm their win.

FACEBOOK: Just leave a comment on our wall letting us know you entered our contest for tickets to Lianna La Havas at the El Rey