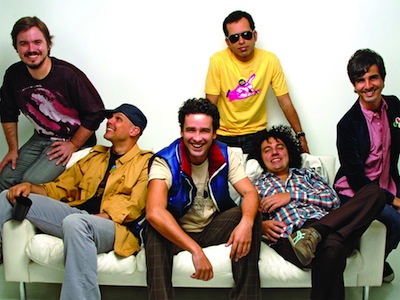 Los Amigos Invisibles headline the Fonda Theater on April 26. Their first album in 1995 has helped develop the band with sounds that are irresistible with the fusion of Latin rhymes with funk and lounge music. David Byrne, from the Talking Heads, discovered the band and immediately signed them to his label. Through Bryne, Los Amigos Invisibles soon became an international touring machine. They have gained Grammy nominations, won a Latin Grammy for “Best Alternative Album”, performed on late-night television, and continue to produce albums. They don’t plan on stopping now. Put some Latin spice into your life, and join us at this amazing show!

Tickets to the show are $22.50, doors open at 7PM, and the show is all ages. You can win a pair of tickets with us by entering the contest below.

First make sure you’re following Grimy Goods on Twitter here and/or “like” our Facebook page here. Next, email ggcontests@gmail.com with your full name for guest list and a clever reason why you want a pair of tickets to Los Amigos Invisibles at the Fonda Theater. When you’re done with your email, send us a Tweet so we know you entered the contest or you can post on our Facebook wall. We’ll select a winner that has done all of the above mentioned. Winners will be announced via email, Facebook and Twitter on Wednesday April 24. Winners will have until 10am Thursday, April 25 to reply back to our email and confirm their win.

FACEBOOK: Just leave a comment on our wall letting us know you entered our contest for tickets to Los Amigos Invisibles at the Fonda Theater.

For more cool shows coming up at the Fonda Theater click here. To enter other Grimy Goods contests, click here.