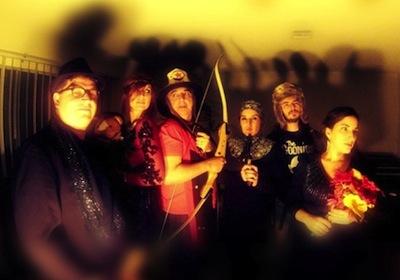 Os Mutantes headlines The Troubadour on Thursday, May 2. A few years back, Os Mutantes played the Hollywood Bowl and revealed what we are all missing. The absurdist ethereal pop music has inspired many musicians since their breakup decades before, and now their back, and we’re ready for more. Their records have been passed from musician to musician, inspiring and altering the contemporary musical landscape. Os Mutantes’ cut-and-paste, sonic collage approach and cultural irony, is an aesthetic now prevalent in modern music. The band formed in the early sixties during a time of turmoil. Music was the only outlet for expression and the band, along with other musicians, writers and artists created a musical style with elements of political criticism, prankster humor, and an eclectic range of musical styles. Os Mutantes has come a long way since their breakup, and people are ready to listen and appreciate this outer world Brazilian group. Supporting Os Mutantes is Capsula, a loud, naughty, and boisterous band from Argentina. Join us for an intimate night full of great Tropicalia music.

Tickets to the show are $20 – $25, doors open at 8 PM, and the show is all ages. You can win a pair of tickets with us by entering the contest below.

First make sure you’re following Grimy Goods on Twitter here and/or “like” our Facebook page here. Next, email ggcontests@gmail.com with your full name for guest list and a clever reason why you want a pair of tickets to Os Mutantes at The Troubadour. When you’re done with your email, send us a Tweet so we know you entered the contest or you can post on our Facebook wall. We’ll select a winner that has done all of the above mentioned. Winners will be announced via email, Facebook and Twitter on Wednesday, May 1. Winners will have until 10am Thursday, May 2 to reply back to our email and confirm their win.

FACEBOOK: Just leave a comment on our wall letting us know you entered our contest for tickets to Os Mutantes at The Troubadour.

For more cool shows coming up at the The Troubadour click here. To enter other Grimy Goods contests, click here.