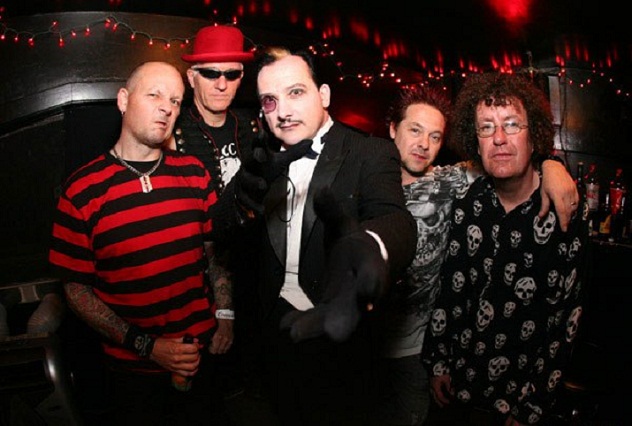 English punk rock band, The Damned will be performing at El Rey Theatre on Sunday, May 26. Formed during the punk era of the 1970s, they were the first English punk band to release singles, along with an album that landed on the UK charts and led them to tour the US.  Presently the band’s current members, joined by original member Dave Vanian, display what The Damned are all about: Rock ‘n’ Roll. Catch the band to hear classic songs such as “New Rose”, “Neat Neat Neat”, and “Grimly Fiendish”, as well as Dave Vanian’s notorious gothic style resembling that of a vampire. Supporting the band will be 45 Grave.

Tickets to the show are $28, doors open at 8PM, and the show is all ages. You can win a pair of tickets with us by entering the contest below, courtesy of Goldenvoice and Grimy Goods.

First make sure you’re following Grimy Goods on Twitter here and/or “like” our Facebook page here. Next, email ggcontests@gmail.com with your full name for guest list and a clever reason why you want a pair of tickets to The Damned at El Rey Theatre.  When you’re done with your email, send us a Tweet so we know you entered the contest or you can post on our Facebook wall. We’ll select a winner that has done all of the above mentioned. Winners will be announced via email, Facebook and Twitter on Thursday, May 23. Winners will have until 10am Friday, May 24 to reply back to our email and confirm their win.

FACEBOOK: Just leave a comment on our wall letting us know you entered our contest for tickets to The Damned at El Rey Theatre on 5/26.