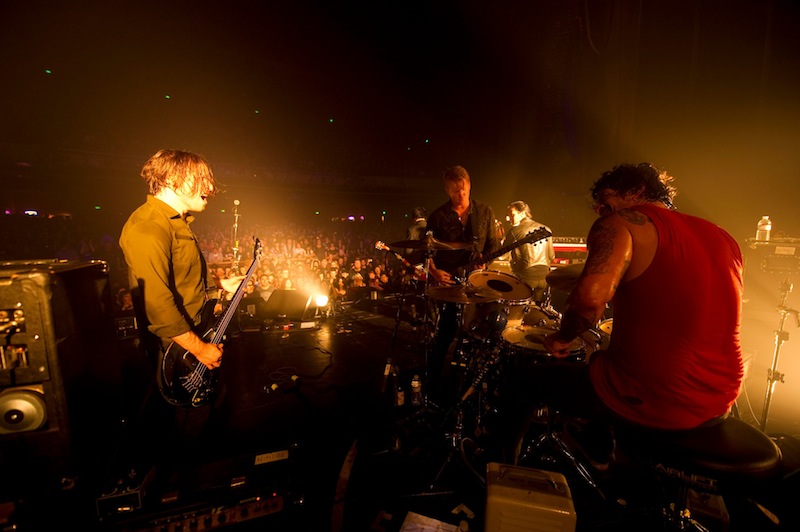 Photo: Ross Halfin via Queens of the Stone Age’s Facebook

After playing a spectacular last-minute set at the Wiltern last week, now Queens of the Stone Age are sharing their brand new album,  …Like Clockwork. You can stream Queens of the Stone Age’s new album  …Like Clockwork in all its entirety via iTunes. As their sixth studio album and first release in six years, …Like Clockwork may be one of their greatest works. The album impresses with its sexy, dark, and funky collection of songs. This is in album you can get down to, between the sheets and on the show floor. You can’t help but just move to some of the numbers on this record. Although the entire album is incredible, below are some favorite jams.

“Smooth Sailing” –  Lovin’ the groove and lyrics on this cocky anthem (pun intended) … ” I blow my load over the status quo, here we go … I’m risking it always, no second chances…”

“If I Had A Tail” – There is something very sexy about this carnal jam. Aside from its title and chorus, if you listen closely it sounds like there is a wild beast breathing heavily down your neck during the chorus.

“Keep Your Eyes Peeled” – This song is dark as it is beautiful and Josh Homme’s voice is very lovely here. Hitting some very soft and high notes, Homme manages to keep it soulful but with a fierce edge. The video for this song is insanely rad as well. Click here to view it.

Click here to stream Queens of the Stone Age new album, …Like Clockwork via their iTunes page. The album is set for release June 4 via Matador. You can pre-order it here.

Queens of the Stone Age will play the Gibson Amphitheater on Aug. 17 to celebrate the worldwide release of their amazing new album …Like Clockwork. Click here for presale tickets!