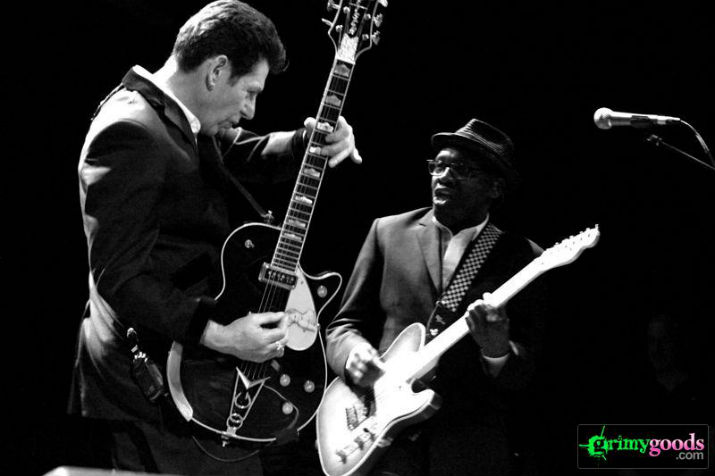 S-K-A. Ska, it’s not a dirty word! It’s a beloved, but too often downplayed Jamaican music style, the precursor to rocksteady and reggae, that’s had listeners’ hips shakin’ and arms flailin’ to its high energy sound since the late 50s/early 60s — even the late and great Bob Marley was doing the ska before he became a reggae legend. There are countless talented ska artists out there, too many to include in this post, but if you’re unfamiliar with ska or just looking to re-acquaint yourself with it, here’s a few artists that rank top of the pops!

1. Laurel Aitken – Donned, the Godfather of Ska (aka ska equivalent of James Brown), Laurel Aitken was an influential pioneer of Jamaican ska and he sang his heart out for all the ska lovers out there from way back in the late ’50s until his passing in 2005. I had the privilege of seeing him live with the New York Ska Jazz Ensemble and even ate in the same Chinese restaurant as him. Love ska, love fried rice, there should be no problem (now that’s unity).

2. Desmond Dekker – This true ska pioneer’s immense influence has reached many corners of the ska/rocksteady/reggae movement. He boasted hits like “King of Ska,” and he helped bring the rude boy subculture to the forefront of ska music with songs like “Rude Boy Train,” “Israelites,” and “Shanty Town (007)” which is featured on the iconic soundtrack for the film The Harder They Come, starring Jimmy Cliff.

3. The Specials – My dad bought me the Specials self-titled debut album when I was 11 or 12 years of age. I took it home, listened to it non-stop and fell in love — once a Specials fan, always a Specials fan. The band’s debut album (produced by Elvis Costello) had a mix of originals and covers/re-workings of previously released Jamaican ska songs but their unique, spot on twist on the music truly transformed them into their own renewed classics – and has made them arguably one of the most well known ska bands from the British 2 Tone revival era. Recently reunited with original lead singer Terry Hall, the band has toured the states, including knock out performances at Club Nokia and Fox Theater (click here for our photo gallery).

4. The Selecter – One of the few female-fronted ska bands to dominate the scene, the Selecter are a staple of the British 2 Tone era. Lead singer, Pauline Black has been dubbed the Queen of Ska and it’s no wonder as she continues to impress to this day with her strong, compelling vocals, commanding style and grace.  The power of their sound can be heard in hits like “On My Radio,” “Three Minute Hero”  and “Missing Words” and more recently on their 2013 album String Theory – there’s just no stopping the Selecter!

5. The Slackers – NYC’s The Slackers are practically a ska cultural institution, the ska kings of the Big Apple, if you will. Their packed show at the El Rey Theatre last week proved that their catchy, soulful songs, superb musicianship and fun, playful attitude is the perfect recipe for getting sweaty, moving bodies out on the dance floor.  Longtime saxophonist David Hillyard even rocked a sax solo from a position of lying on his back on the stage floor — pure rock n’ roll ska!

6. See Spot – A Southern California favorite, See Spot are perhaps less notorious than Hepcat but every bit as groovealicious with their mezcla of swingin’ ska, soul, jazz and Latin sounds. Songs like “Mad Hearted Woman,” “Mercy, Mercy, Baby,” and “Cuando, Cuando Que Sera”  will hook you instantly and if you didn’t think you could shake your booty non-stop to a ska band, See Spot will prove you absolutely wrong!

And because we just couldn’t stop the there, here are two Spanish ska bonus picks from our Grimy Goods contributor, Brissa Sanchez.

Red Store Bums – Composed of seven members tha include one girl, local So Cal act the Red Store Bums sing in both English and Spanish, and know how to seamlessly combine ska with reggae. The band gets bodies moving with their fast-paced songs heavily fused with trumpets, trombones, drums, and of course, accelerating guitars. They are a lot of fun for everyone!

Antidoping – Hailing from Mexico City and formed in 1992, Antidoping combine classic roots reggae with ska. Their lead vocalist Jacobo Goeva has a fierce reggae vocal rhythm that can croon like the best of them.

WHO ARE SOME OF YOUR FAVORITE SKA ARTISTS? LET US KNOW IN A COMMENT BELOW!