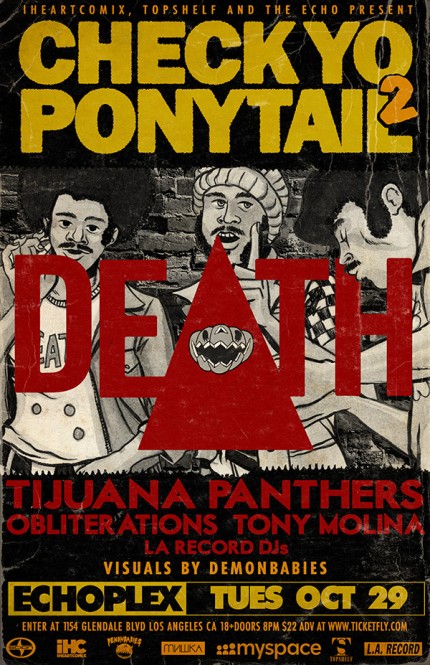 Now this is a badass Check Yo Ponytail line-up. The seminal garage punk band, DEATH, has a headlining show at the Echoplex next Tuesday, Oct. 29. If you’re into garage, punk, and anything that rocks loud and proud, we highly recommend you attend this show as DEATH are a huge influence on a lot of the bands you are familiar with today. Ever since their 2010 performance at the Boomslang Festival in Lexington, Kentucky the band has been making waves with a new album, a documentary titled A Band Called Death, and most recently they’ve been playing some underground venues — including a recent house party in Los Angeles with Obliterations.

First make sure you’re following Grimy Goods on Twitter here and/or “like” our Facebook page here. Next, email ggcontests@gmail.com with your full name for guest list and a clever reason why you want a pair of tickets to DEATH at the Echoplex. When you’re done with your email, send us a Tweet so we know you entered the contest or you can post on our Facebook wall. We’ll select a winner that has done all of the above mentioned. Winners will be announced via email, Facebook and Twitter on Monday, October 28. Winners will have until 12pm noon Tuesday, October 29 to reply back to our email and confirm their win.

FACEBOOK: Just leave a comment on our wall letting us know you entered our contest for tickets to Death at The Echoplex on 10/25.

For more cool shows coming up at the Echoplex click here. To enter other Grimy Goods contests, click here.

2 thoughts on “Win tickets to Death, Tijuana Panthers & Obliterations at the Echoplex!”