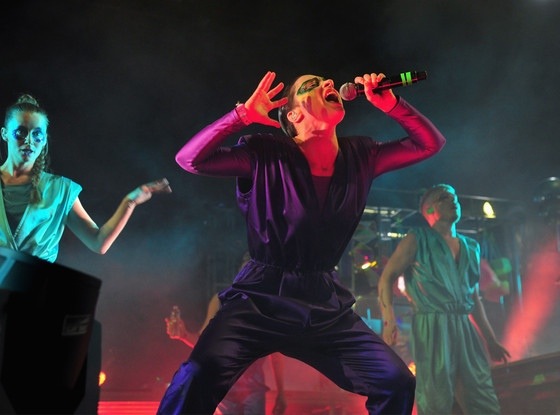 The Knife just seems like a band that, instead of handing out free three dimensional glasses upon purchasing a ticket to their show, you should be gifted with some sort of psychedelic drug in order to digest their set.

Even in a sober mindset, The Knife’s Friday night Coachella weekend two set was quite a mindf*ck, so to speak. It was one part live music and two parts Cirque du Soleil. The Swedish electronic duo might be just a year or two ahead of where the typical Coachella attendee is at musically. Many in a hard time had a look on their face as though they weren’t yet grasping the concept. Were they supposed to dance or weren’t they? It often resulted in people getting caught in that awkward in-between dancing and not dancing mode.

“I want to thank you all for coming because my life would be very boring without you people,” said vocalist Karin Dreijer. Somehow, I found that hard to believe based on the show The Knife has managed to put together, something quite different from most electronic shows.