I have a confession, dear Internet. Lately, it has been difficult for me to love music with the same fervor I once did. Much of this is due to recent global events that, try as I might to ignore them, have seeped into my consciousness making me painfully aware of the limitations of the musical medium.

A six string is hardly enough to defend against bullets.

A piano only lends to the affluence of elevators.

It has been a trying time.

Until last night, my recent loss of faith has only found reconciliation in Cymbals Eat Guitars’ album LOSE. But, last night, I add another epiphany: Karen O’s performance at the Masonic Lodge at Hollywood Forever Cemetery.

It is an unseemly hot night in Hollywood as I stand against a leaved wall in the pitch-blackness of the Cemetery. 30 minutes have ticked by since doors were scheduled to open and many are confused about the hold up. Even more are wondering why the venue doesn’t install some lighting along this line. All of us are hoping there is air conditioning inside. There is a pair of patrons behind me engaging in the old ritual of the live-music pissing contest,

And so it goes.

In a world of knob turning DJs and hyperbolic publications, music’s true ability to connect and expand has been squandered. Replaced by excitement, Facebook statuses and Instagram feeds one wonders, ‘are the notches in your musical belt more important than the collective and fleeting experience of hearing noise?’ The Coachellas of the world answer a resounding yes.

The Masonic Lodge, where the concert is taking place is an intimate venue. It resembles a church. With a capacity of about 200, the seats are tight and close. The stage tonight is decorated with five high-backed royal seats. A flower strewn chupa-like border surrounds them. Above, is a lit up neon blue heart with the words “Crush Palace” written inside in neon red. There are no drums on stage, only guitars.

Things are very nonchalant here. The bar is a fold out table with wine bottles upon it, buckets of beer behind. Everything is casual. Except for the venue’s intense NO PHOTOS policy. Before I find my seats I have seen a dozen fans escorted out for attempting a selfie. As everyone settles in, two players approach the stage and begin tuning guitars. There is a hush. My phone tells me it is 75 degrees, but it feels like 86.

Karen O, hardly a stranger to performance and production, walks down the aisle (stage left) to the platform. She is wearing a glimmering blue dress and looks not unlike a bride and very much like a fairy.

An empty beer bottle hits the ground and makes a brassy clang.

Just as soon as it begins it ends. The claps are well deserved, but feel almost voyeuristic. Before the spell is broken Karen begins “Ooo.” The piercing high note cuts a chord, “Don’t TELL me they’re all the same.” The players accompany with light “du du duu, du du duu”s, and we are all transfixed; we are all transmitted to when sounds clutched hearts, when words permeated flesh. There is a fog in the room.

It is when the band begins “Rapt” that I realize where it is I am transmitted. O’s delicate and intimate take, transcends trends. There are no lit phones here. There are no check-ins. I am reminded of being lost, without family (they moved far away from me when I was young.) Nights when only music helped me feel less alone. Those nights spent looking at weathered pictures of brighter days with little left in the bottle. It is akin to sitting in your friend’s living room and listening to her play a sweet song and realizing that you are there and soon you will not be.

The song ends. The claps begin. Snapping would be more apropos. But, the masses insist on clapping. Karen O laughs. She is not above laughing. This is a happy time.

The show goes on. In the middle of the set, L.A.s talented artist Moses Sumney, also moonlighting tonight as one of the players in the band, performs a solo song. Karen O sits on the second-to-left of the royal seats; she does not take the center seat.

When the show is over the crowd calls for another. Karen O comes back out. She sits close to Sumney as he strums lightly the opening café-chords to “The Moon Song.” They sing sweetly together the refrain, “We’re a million miles away, a million miles away.” And I am emboldened.

Guitars can not block bullets, but they can pierce.

Pianos can not curb aggression, but they can inspire dance.

A voice can speak beauty. A sentence can be a lamppost. Even in a cemetery, a word can be a light.

Check out the photos below of Karen O at the Masonic Lodge at Hollywood Forever! 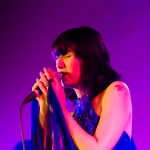 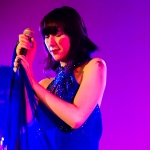 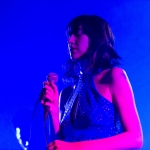 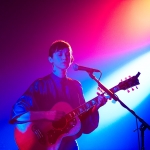 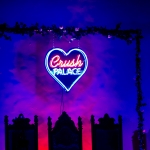 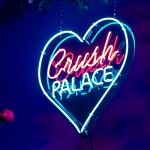 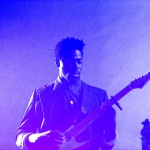 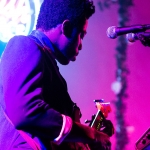 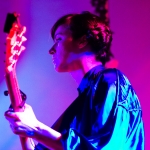 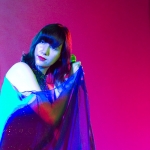 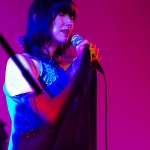 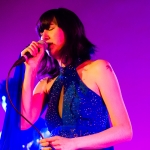