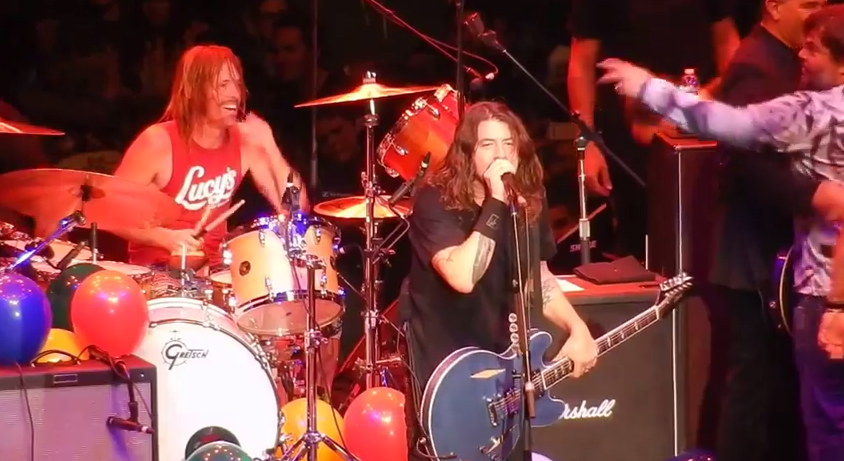 The Foo Fighters have announced a very special performance at the iHeartRadio Theater in Los Angeles on Tuesday, March 17th (yes, that’s St. Paddy’s day!). And it’s FREE! Located in Burbank, the iHeartRadio Theater is a one-of-a-kind performance space with state of the art EVERYTHING. With space for about 200 people on the floor, you’ll be right under Dave Grohl’s nose! You might even catch some of his sweat (like we did at Spaceland in 2011). There is no bad view from this venue, even the balcony seating (of about another 200 seats) are all top-notch viewing areas.

The concert sponsored by The Honda Stage will be hosted by Chelsea Handler! This should make for a very awesome Q & A. Celebrating their 8th studio album, Sonic Highways, the Foo Fighters will perform for an hour playing their new songs as well as their radio hits. The show will be streamed and broadcast live on iHeartMedia radio stations across the country. You can watch the broadcast here on Tuesday, March 17 at 7 p.m. PT/ 8 p.m. MT/ 9 p.m. CT/ 10 p.m. ET.

If you missed the Foo Fighters extraordinary birthday bash for Dave Grohl The Forum, here’s a chance for you to see them in a much more intimate setting. Or you can hang out and wait until their tour run kicks off this summer with dates at The Forum in October of 2015. That’s a long wait, so you best get on this Foo Fighters show at the iHeartRadio Theater in Los Angeles.

So, how do I get into this exclusive Foos show? If you’re asking yourself this question, the answer is: if there is a will, there is a way … We all know the iHeartRadio Theater in Los Angeles is one of the most coveted venues and hardest to get into. Fans will have a chance to win their way into the show via iHeartRadio stations starting March 2nd and maybe a few other ways … Stay tuned for more details and your guest list spot into the Foo Fighters’ show at the iHeartRadio Theater Los Angeles.

You can enter for a pair of tickets here!

Foo Fighters – Something From Nothing