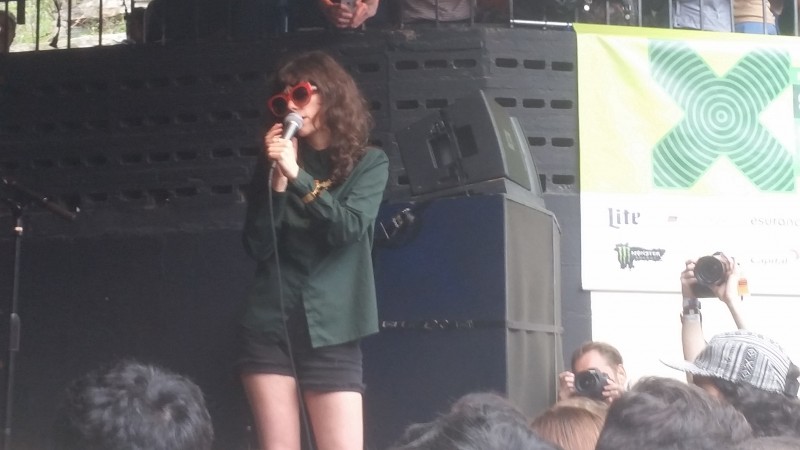 Natalie Prass at House of Vans at Mohawk.

All week I knew that Friday promised to be the busiest day for me music-wise from beginning to end. From noon to 1:30 AM, I hit five different venues and got to see a dozen different acts, almost all of which I hadn’t gotten a chance to see the previous two days.

My day started at Mohawk for House of Vans. I caught the tail-end of British synth-pop act JUCE. They had great energy and I liked their sound. Lead vocalist Chalin was able to get the crowd really into it, which is a lot to ask at noon after most people have partied the previous three days and were hungover. “Austin, you just got JUCED!” she shouted at the end of her set to great applause.

Natalie Prass took the stage next. Prass is a graduate of the Jenny Lewis School of Bad Assery (no doubt learning a few things from playing in Lewis’ band last year), and she has a real command of the stage. Her Nashville sound straddles the line between indie rock and folk perfectly. During one song, Prass showed a sense of humor when — during a song — she made friends with a male fan and inserted his name — Chris — into the song, which had plenty of people smiling. Her cover of Janet Jackson’s “Any Time, Any Place” (which is a B-side to her single for “Bird of Prey”) was impressive. It was quite a dirty track for early in the afternoon.

Next, I made it to the Palm Door on 6th for the Universal Music Group showcase. Where else but SXSW can you see Scott Weiland of Stone Temple Pilots and his new band sandwiched in between rising female vocalists Charlotte OC and Ryn Weaver? 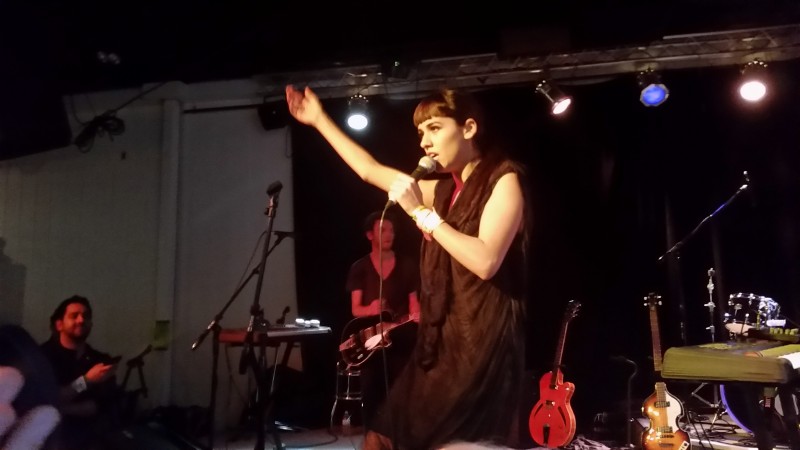 Charlotte OC kicked off her set with her R&B-fused track “Hangover,” which right away gives you a glimpse of just how powerful her voice. Her cover of Rui da Silva’s “Touch Me” has never failed to give me goosebumps as she performed it with nothing but her voice and guitar. “Colour My Heart” sounded fantastic and her new single “If My House Was Burning” was well received. By the time her set reached midway, the room was pretty packed and in awe.

The 9-year-old version of myself is extremely jealous that I got to see Scott Weiland perform. Kicking off their outdoor set with the STP hit “Crackerman,” Weiland mixed in songs from his heyday along with tracks from the upcoming Scott Weiland and The Wildabouts album Blaster, out Mar. 31. Weiland has made it big with two bands now — STP and Velvet Revolver — now he’s attempting to make it a third, this time with his name in the marquee.

“Big Bang Baby” was one of my favorite songs growing up, and when Weiland delivered the chorus, I was teleported back to when I had a 9 pm bedtime. Because it was raining by the time they performed. they had to scrap an acoustic song from the set (“It warps the guitars for some reason,” said Weiland) but they closed the set on a high note with “Unglued.” 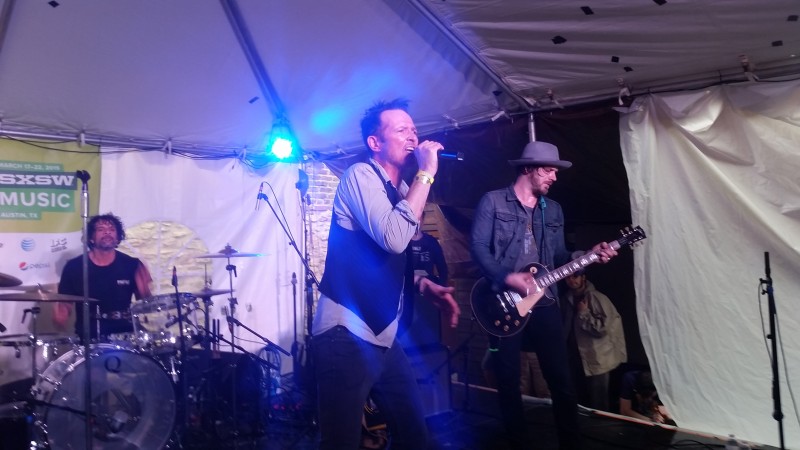 At this point, Ryn Weaver was into her set on the indoor stage. Having seen her twice already, I figured why not catch some of her set before heading to the SPIN day party. Even after numerous showcases, it hadn’t gotten any easier to sing the song dedicated to her grandfather “Sail On,” as she nearly broke down. It got really dusty in that room for some people by the time the song finished.

I was able to run over to the SPIN party and catch the final 30 minutes of Brooklyn hip-hop act Run the Jewels, who were definitely one of the buzziest acts of SXSW. On Tuesday, someone tried attacking them on stage at Spotify House, but their set was without issue this time. “We’d like to dedicate this song and say ‘f*ck the Ferguson Police Department'” shouted Killer Mike before performing one song. Run the Jewels is great because their music has a positive message, they are extremely positive people, and the vibe in the crowd was as lovely as it got all weekend.

I headed over to FADER Fort and caught the tail-end of R&B singer Kehlani’s set. I had previously seen her open for G-Eazy a couple of times and thought she had pretty good control of what had to be one of the larger crowds she has performed to.

Next was a rather odd booking. Canadian rockers Viet Cong performed, sandwiched in between Kehlani and what was supposed to be Migos, but ended up being Big Sean. Most of the people towards the front by the time Viet Cong took the stage were there waiting it out for Big Sean, and I think the band even realized that.

“I smell reefer, don’t you guys know that the cops are here?” joked singer Matt Flegel in between songs. Everyone nearby me that was in the middle of smoking a joint didn’t really like the joke. The band did receive appreciation for their insane breakdown portion of the set-closing song “Death.”

During the in between, I saw something funny happen. These three girls asked this guy to take a picture of them. I could see what he was doing, and before he took their picture, he selfie’d himself and Snapchatted it from the girl’s phone. Dunno what it said, but it made me laugh.

Because of time, Migos got bumped until after Big Sean. Big Sean was one of the highest energy sets of the week, performing his various hits while also bringing out Bay Area rap icon E40 onto the stage for their hit “I Don’t F*ck With You” to end the set. Big Sean has crazy flow, reminded me a bit of the tongue-tying rapper Twista at times with how fast he was able to spit his rhymes. Big Sean also had a very positive but short un-Kanye like speech about reaching for your dreams that was very heartfelt. 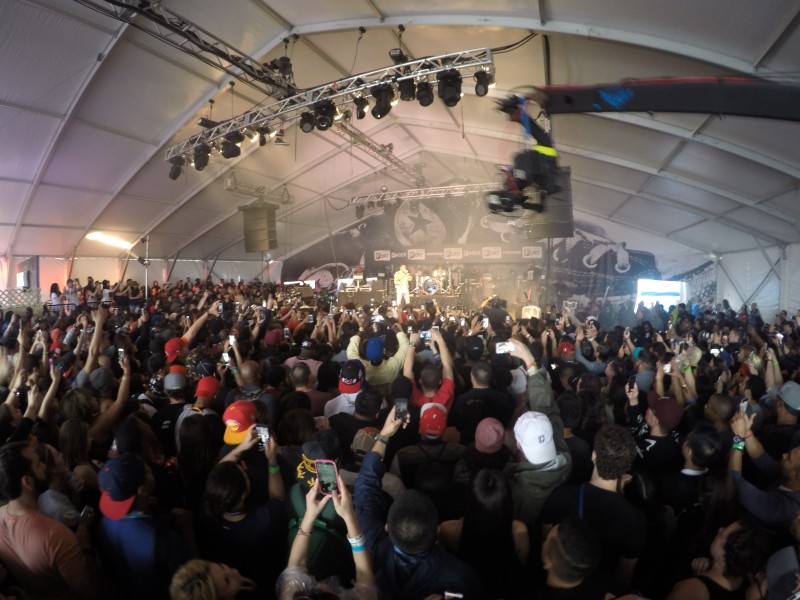 Big Sean performed Kanye’s “Clique” and Drake’s “All Me,” suggesting perhaps his most memorable bits aren’t even his own songs.

Migos performed a brief set that lacked the fire I was expecting. They’ve been tearing up the tour circuit and have been known to deliver a memorable show, but it fell a little flat this time with the Fort having the momentum stolen by Big Sean. Their entire crew that was 30 people deep at least took to the stage and threw shirts into the crowd while they delivered their performance.

The surprise closing set at FADER Fort was T-Pain. When he was announced, a few people near me groaned. But then 15 minutes later, I saw them all dancing and singing along to the hit “Buy You a Drank.” “I guess we forgot how many T-Pain songs we knew,” one of them said to me, laughing.

That’s the thing. Everyone knows at least a dozen T-Pain verses. Hip-hop shows are all about having a good time, and to me are the one type of show I don’t mind people pulling out their phones, Snapchatting, etc., because it is all about sharing that good vibe. The fact that these T-Pain songs haven’t been bogging down the radio the past few years brought a certain freshness to them.

“My main objective is to remind motherf*ckers who I am,” shouted T-Pain. He even performed “I’m ‘n Luv (with a Stripper),” something he says he doesn’t do much anymore. By the end of his 45-minute set, he had performed bits from 42 different songs.

After getting my hip-hop fix for the day, I headed to Stubbs, where there was more of an indie rock feel to it. First, I caught the end of British singer Laura Welsh’s set and was thoroughly impressed. She will actually be in LA supporting Years and Years on Monday, Mar. 23 at The Avalon and she will be at Troubadour on Mar. 25, I highly recommend checking her out. 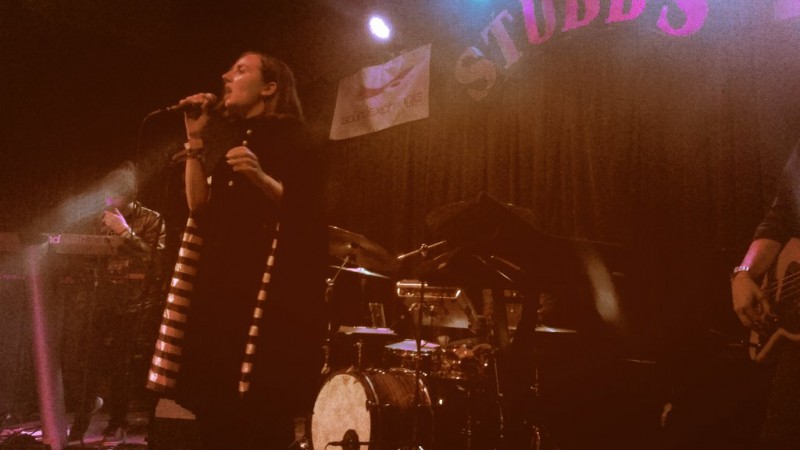 Next was Aussie singer Meg Mac, whom I had interviewed on the phone the previous day. It took awhile for her band to get setup, and the venue cut her off after four songs. But her performance was so strong — “Known Better” and her Bill Withers cover “Grandma’s Hands” especially — that people begged for one more song. The band tried, but the mics were cut off.

Next was singer Elle King. A fusion of country, blues, and rock, the LA-born, NY-based singer crooned with the best of them. Her single “Ex’s and Oh’s” had the room moving. She’s got a gravely-sort of smoky sounding voice that fits her like a glove. She ended her song with an interesting cover, Khia’s “My Neck, My Back,” a dirty R&B song that Elle King gave a hilarious and fun twist on. Though her performance was over, it wasn’t the last we’d see of her that night.

Outdoors, synth-poppers Bleachers performed. It was still raining pretty hard, but that didn’t stop Jack Antonoff and his band from delivering a memorable performance. Antonoff has slid into his role as frontman from being the guitarist of fun. rather easily. He’s a natural rock star, and he got the crowd involved in a big way. The highlight of the entire night might have been when they brought Elle King out and performed a sick cover of Fleetwood Mac’s “Go Your Own Way,” King’s voice coming close to what Stevie Nicks managed to achieve on that all-time great song. 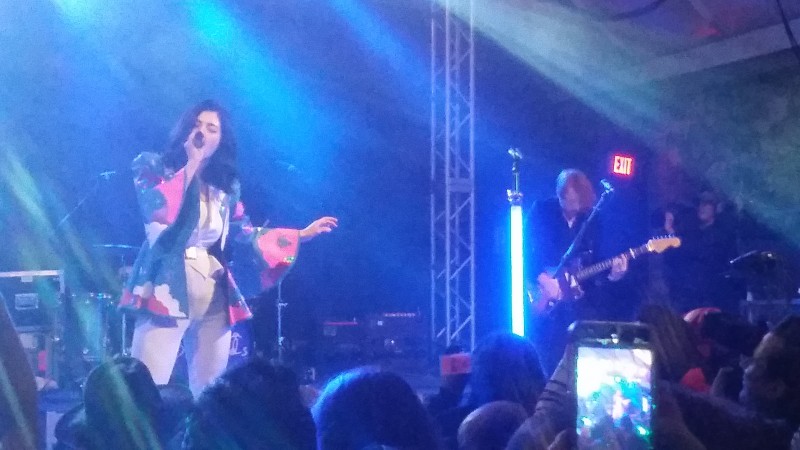 Marina and the Diamonds at Stubbs.

The rain still coming down, rising UK artist Marina & The Diamonds were set to close the Stubbs showcase. An hour passed and someone came on the stage saying they were figuring out technical difficulties, and there would be a show, so be patient. The band finally took the stage around 1:30 AM, and it seemed like it was about to kick off. Then there were still a few issues, but a few minutes later, Marina kicked into her set full-swing. She started off with the catchy “Bubblegum Bitch” and the shortened set wrapped up with the title-track from her recently-released album Froot. She came on stage donning a bad ass looking blazer that she ended up ditching a few songs in. Marina has great showmanship and had the crowd moving despite it being the end of a really long day.

On my way out to catch a Lyft back to where I was staying, I walked by Mohawk and found a group of about 30 people dancing outside the venue to the sound of Dilated Peoples wrapping things up on the inside. That was about the most representative image of SXSW that I could think of after having spent three days at this insane fest in Austin. Can’t believe there’s still one more to go. 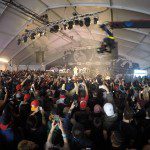 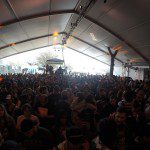 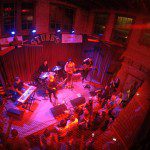 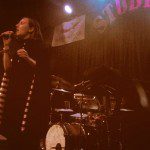 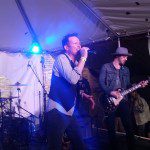 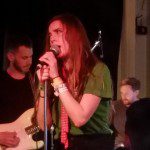 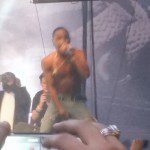 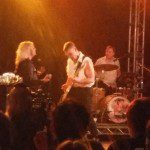 Jack Antonoff of Bleachers and Elle King at Stubbs. 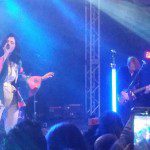 Marina and the Diamonds at Stubbs. 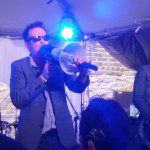 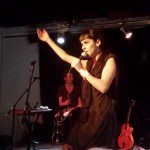 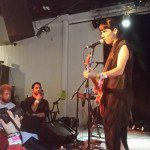 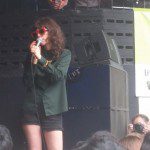 Natalie Prass at House of Vans at Mohawk.