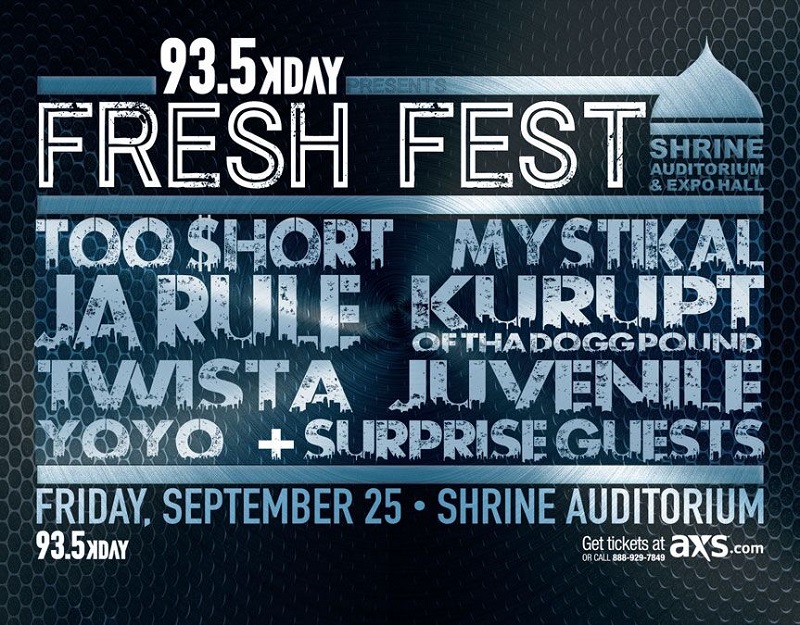 Old school hip hop station 93.5 KDAY will host their annual Fresh Fest featuring both classic and contemporary hip hop artists at the Shrine Expo Hall on Friday, September 25th! Back in 2010, the earliest known date of the festival, Ice Cube headlined along with Tha Dogg Pound and Warren G. This year, the festival will feature Too $hort, Mystikal, Ja Rule, Kurupt of Tha Dogg Pund, Twista, and many more! As Mystikal would say, come on down and “Shake Ya A**”!

Tickets for KDAY’S Fresh Fest at The Shrine Expo Hall are priced at $9.35-$75, doors open at 6:30pm, and the event is all ages. You can purchase tickets or win a pair of tickets by entering the contest below!

First make sure you’re following Grimy Goods on Twitter here and/or “like” our Facebook page here. Next, email ggcontests@gmail.com with your full name for guest list and a clever reason why you want a pair of tickets to KDAY’S Fresh Fest at The Shrine Expo Hall When you’re done with your email, send us a Tweet so we know you entered the contest or you can post on our Facebook wall. We’ll select a winner that has done all of the above mentioned. Winners will be announced via email, Facebook and Twitter on Saturday, September 19th. Winners will have until 10 AM Sunday, September 20th  to reply back to our email and confirm their win.

FACEBOOK: Just leave a comment on our wall letting us know you entered our contest for tickets to KDAY’S Fresh Fest at The Shrine Expo Hall on Sept. 25th!